while i was busy frolicking in Oregon, The Matt got laid.  **

back it up, back it up:  i just spent about ten days in beautiful, beautiful Oregon.  i went to four different cities, spent time on a mountain, had a blast, and saw a ton of people. 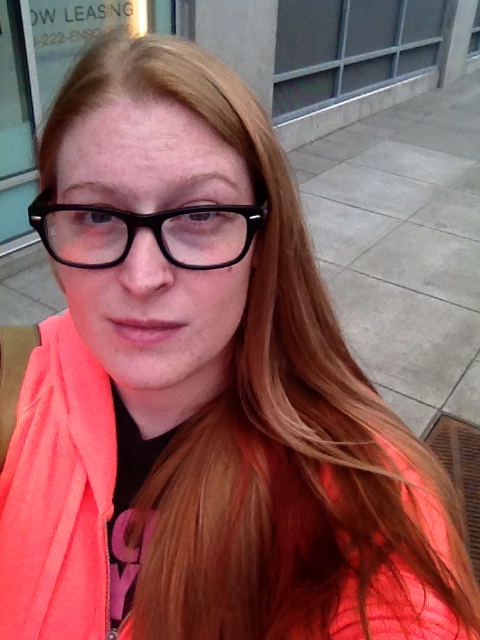 i also got my hairs did.  look ma, my natural color is back!  for now, anyway...
okay, okay.  minus that bright red part.  and the bleached blonde streaks.  oh fuck it, it's kinda reddish and i won't have to dye it for a while.... that counts, right?

i am a very loyal Satan - i find one person i love (such as my Oregon stylist), and i'll never bother switching.  i don't go to Oregon to get my hair done... but guaranteed if i'm there, i'll be seeing Gina, for she is The Awesome, and i can tell her something incredibly vague like "make it look cool," and i will LOVE it when she's done.  hell, i could go in and say nothing, and my hair would still look awesome.  of the many, many things, places, and people in Oregon that i dearly miss, Gina rates very high on the list. 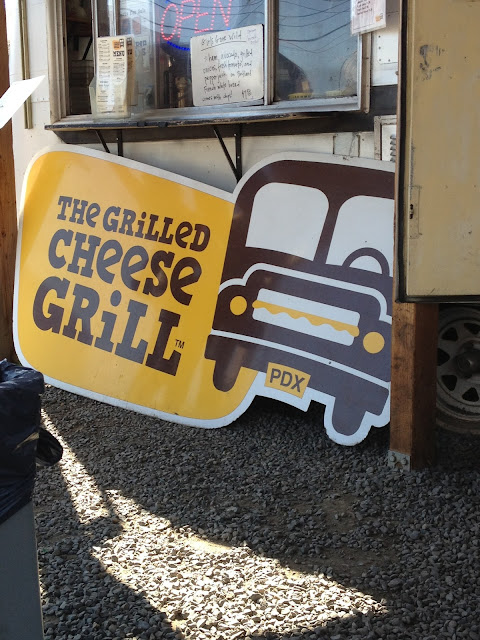 THIS place is about four blocks from my former Portland house... and oh, i love it so.  it is exactly what it sounds like.  it is also open past bar closing time, for all the right reasons, and thus an extremely entertaining place to be at about 2 am. 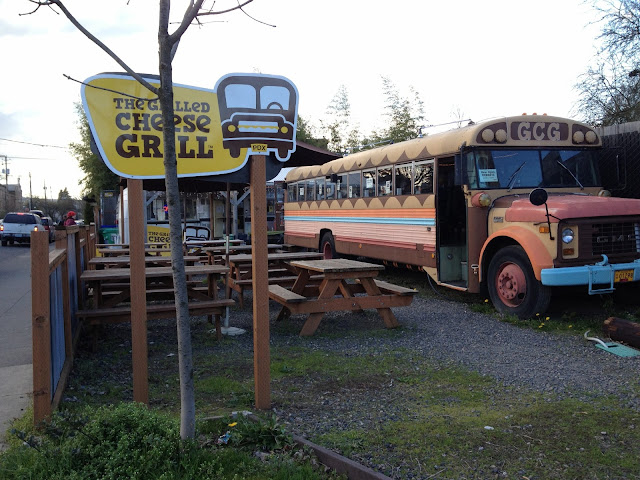 BUS.
this place serves something called a Grilled Cheezus, which is a hamburger patty sandwiched between two grilled cheese sandwiches.  it might be a heart attack on a plate, but it's such a GOOD heart attack... 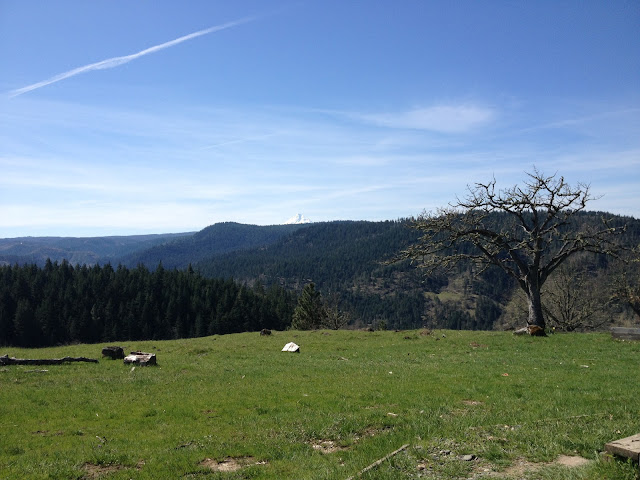 so when i mentioned the mountain....
my former roommate Dave has moved out to ButtFuckEgypt, and it is just GORGEOUS out there.  he lives in a wee shack, which is built onto a bus.  there is only one drawback to all of this:  the outhouse.

it is ridiculously difficult to get out of one's cozy lofted bed to run out into the chill of the night just to piss.  it was one of those few times i wish i was a guy - i would literally just open a window and piss right out of it.  fuck that whole "getting up" business.  bitches be lazy. 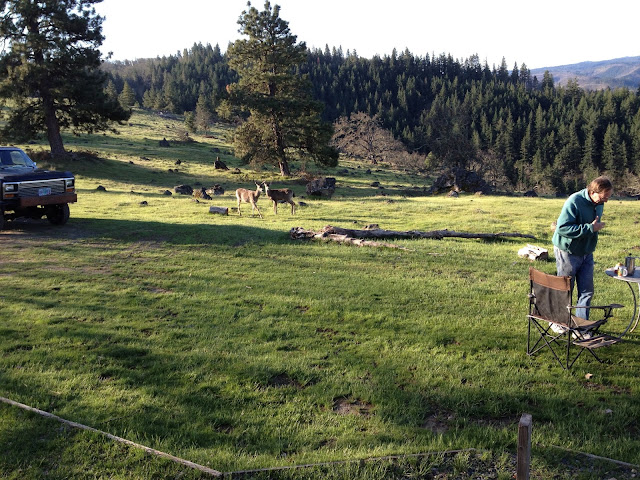 see those deer?  they're stupidly tame.  to the right, that's Dave.  i don't think he knew he was in this photo. 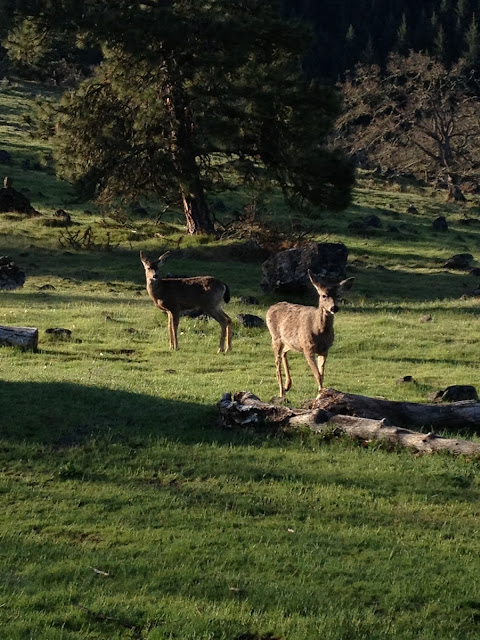 (ps, this photo is not cropped, i was just close.)

these motherfuckers aren't scared of shit.  they will walk right up to you.  i went to the outhouse one night and heard a rustle rustle rustle rustle in the bushes - and lo and behold if these little bastards weren't staring at me as i made my way to piss.

evidently deer are into that sort of thing. 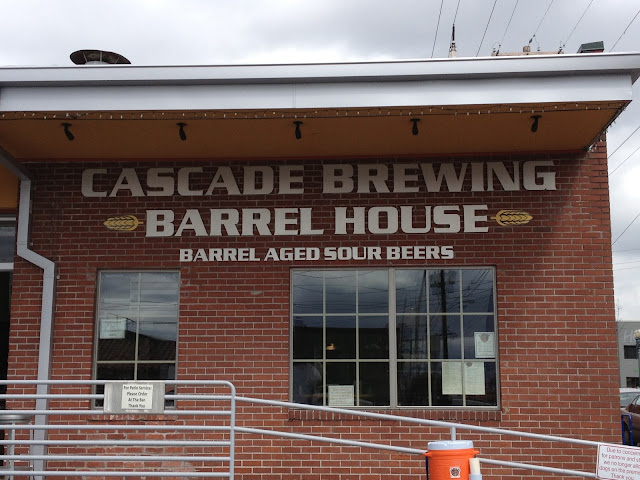 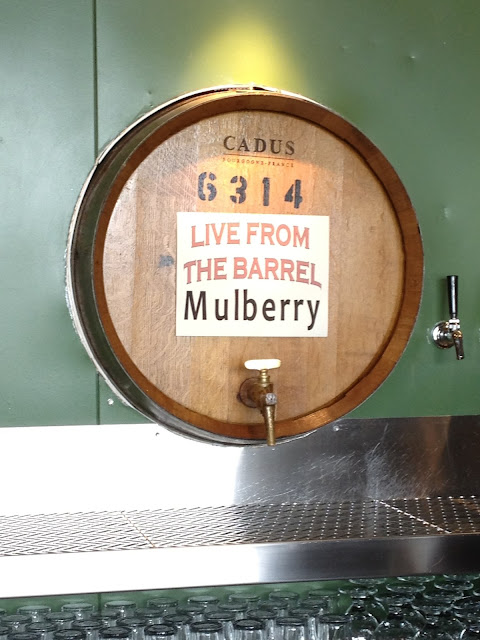 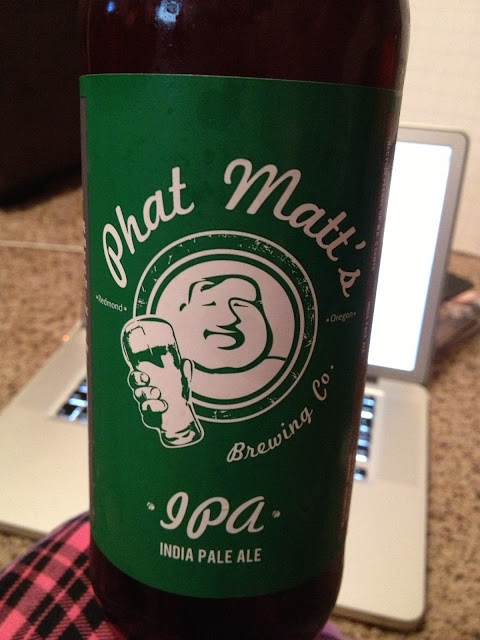 i knew The Matt was gonna get fat someday. 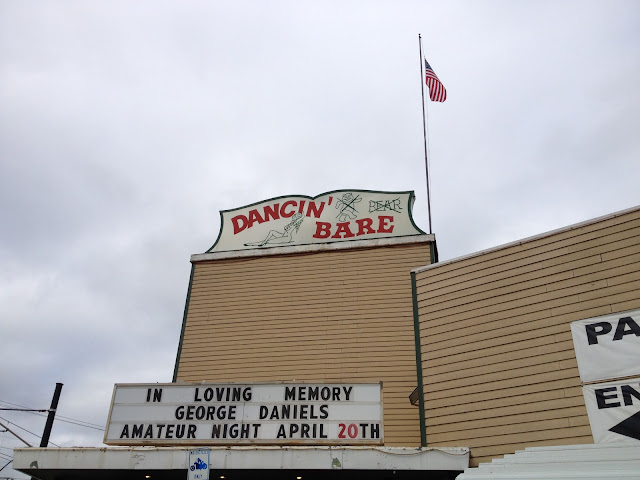 this exists:  just one of the many reasons i love Portland so... 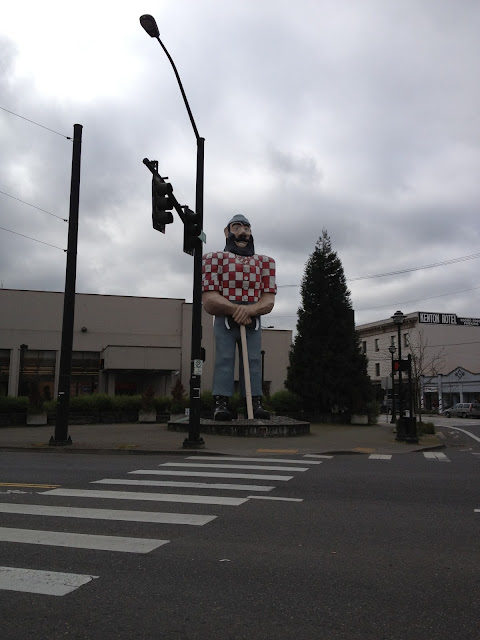 ...right across from Mr. Paul Bunyan, of course.  like you do.

it makes sense.  i am SURE that lumberjacks are all about the titties.  i know i am, even if i'm not a lumberjack - although i certainly own enough flannel to fit right in.   (shh, don't tell.  i'm secretly still a grunge kid.) 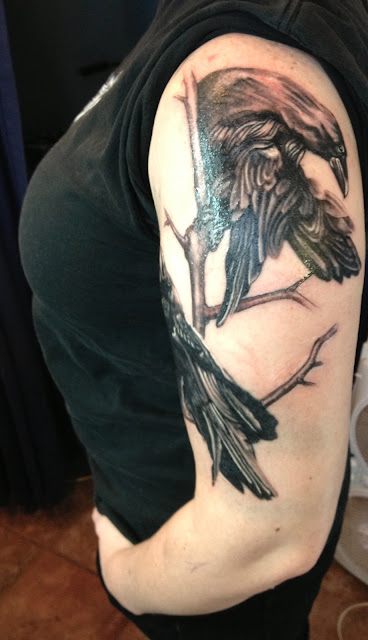 and of course... new ink.
one of the aforementioned former lovers has a brother who is SO. DAMN. GOOD.  he did this tattoo.  see?  this is just one of the many reasons why it's a good idea to be friends with your exes.  i even got a friend discount.  yeahhhhh! 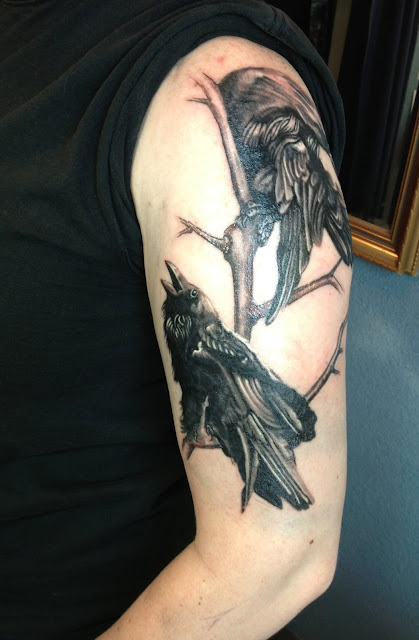 they're ravens.  eight damn hours i sat for these birdies...
i now have a firm rule:  i will never, ever sit for more than four hours.  ever ever ever ever ever.  jesus fuck, that was brutal. 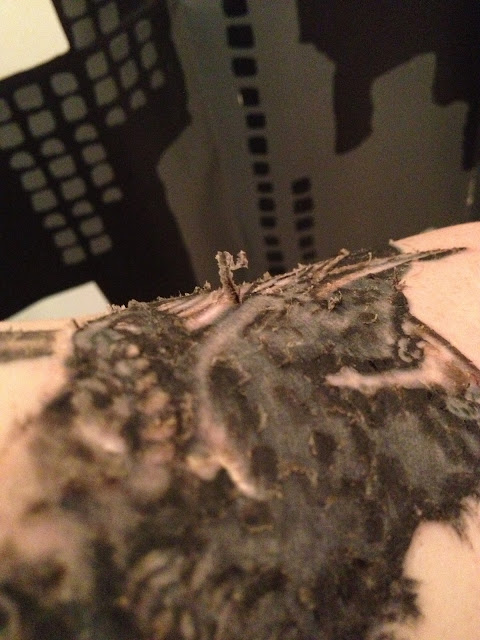 my personal least favorite part of tattoos, and the getting thereof:  the motherfucking molt.

for those of you who have never gone through the ritual of sticking needles into yourself for no good reason, this is what happens after the tattoo.  i don't care how bad the tattoo itself hurts, this is the worst part.  it ITCHES LIKE A FIEND, and you CAN'T SCRATCH IT, lest you start peeling the scabs (ahem) and then your ink bleeds out, and if so you have to go BACK, and then you get more scabs...  it's the worst.  the tattoo only takes so many hours.  the healing takes two weeks.

right now i'm in the supremely itchy "look ma, no more scabs!" phase, but you're still not supposed to scratch it, and GODDAMNIT I'M SO ITCHY SOMEONE PLEASE COME SCRATCH MY ARM.

okay, okay, onto the juicy shit, cuz we all know you're reading this because there's sex involved.  aren't you?  i'm writing it because sex is involved.

i was just chilling at a Portland bar, when this text conversation happened - verbatim.
Matt: "i'm hung over."
me: "went out with the girls?"  (his two friends from his hometown that now live in austin, also.)
Matt: "yep.  ended up taking [redacted] home with me."
me:  "oh yeah?  how'd that go?"
Matt:  "she is paranoid that you will hate her."
me:  "why?  silly girl."
Matt:  "i told her that she just needs to fuck you too and it will be ok."
me:  "i think it's funny that i took the trip, and YOU ended up the one getting laid.  good one, universe."

i announced this fact on twitter at some point, and one of the tweeps was like "argh are you infuriated?"  i don't think she knew about the poly.  i find it amusing that so many people think my life is INSANE, and i think THEIR life is nuts.  (fuck only one person?  WHY?  i'll just be over here with this hot girl... erm, respecting people's monogamy.  yeah.)

the last final bit of "excitement":  my first flight got canceled, so i spent an entire goddamn day at the airport.  and there's only one thing to do when you're stuck in an airport... go find the bar, and get drunk.

which i did, with help from a random bar friend who was on my flight.  she was cool, and she snagged me a seat on the "massive amounts of leg room" aisle later.  but we had a LOT to drink all day, so imagine my consternation when we landed in dallas at 2 am, went to go to our complimentary hotel, and got into this... 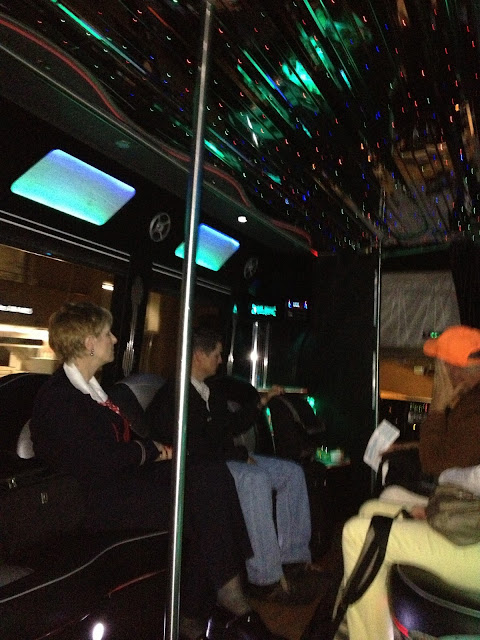 this is a motherfucking strippermobile!!  if i hadn't had so much luggage, i might have had to try it out.  as it was, i was tired and drunk and barely made it to the hotel without falling over.  i did manage to text, though:  i always do.

Matt:  "i assume when i see you in the morning you will be beaming sunshine and sparkles.
glitter too, can't forget the glitter."
me:  "HAAA.  i will probably immediately drag you back to bed.
THE KRAKEN.
be prepared for mass amounts of cuddling."
Matt:  "i love you too damn much."
me:  "no such fucking thing."

** The Matt and i are polyamorous.  feel free to go and google that.
have i mentioned i'm shitty at being monogamous?  i am really, really shitty at it.  fun fact:  i haven't had a monogamous relationship since before i was legally able to drink.

love the new ink ... and I HATE that itchy stage.. .every time I'm itchy I just rub lotion on it.. it's itching without itching.