i'm probably a terrible person, but: god is bad for you, y'all.

i'm starting a bad trend of sitting down to blog when i'm non-sober.
i just went and made myself a vodka and sweet tea.
i realize this is disgusting, it's just that someone gave me half a bottle of free vodka with a pour spout the other day (i was actually more excited about the pour spout), and we have nothing else to mix with besides milk. and trust me, i am not stupid enough to mix that shit up. tea, yes. milk, no.
whoever created the white russian must have had a gastric death wish.
vodka isn't exactly my friend. it's been responsible for
A. giving me a terrible first-time-smoking-weed experience,
B. almost killing me in college several times,
C. making me puke all over the damn place, also several times. maybe more than several.

i usually avoid that shit, but unfortunately, i don't turn down free booze unless it's truly terrible, and this is absolut, so i made the sacrifice. i hope my liver forgives me.
i have a feeling i'm going to regret this night in the morning.

so anyways, i was obviously far too bored tonight, so i watched this documentary called Jesus Camp tonight, after work.
i learned that evangelicals are fucking scary.
of course, i knew that anyway, i grew up with some overly christian parents who guilt tripped me about the weirdest shit, but i did turn out mostly normal, i think...
wait, no, never mind. strike that, your honor.
don't get me wrong, i do support freedom of religion, but goddamn, i do not support indoctrination of children, plus a bunch of "sin" guilt-tripping and political lobbying within churches.
naturally, being me, i wanted to do something subversive while watching this, and somehow that thing turned out to be equipping myself with a pair of tweezers and "grooming" my pubic region, seeing as how i'll be getting naked for money at job #3 tomorrow (yes, i'm stripping again, is anyone here shocked? no? good, you're getting to know me).
so i'm sitting there, yelling at the tv people for telling children terrible things about abortion (which i fully support, for full disclosure), extending my middle finger and waving it at the screen a bit, and then muttering "ouch!" when i pinch myself with the tweezers.
my life is exciting.

work has become insane, due to several things:
1. new manager for the dancers !!!!!! oh yes, bag of hammers girl is gone. i feel so vindicated.
2. 5 days a week of work instead of 3...
3. now working at 3 clubs instead of one, so i rotate around. well it's not boring, at least.
4. i got new boots! they are red. well, at least partially. i should be posting a picture, but know what, i'm not, because i'm lazy! maybe also a bit intoxicated. i'm sure you'll get a picture later. you'll also get a before-and-after picture set, because i have lost a bit of weight from this job, a surprising amount, actually. at least 2 pants sizes, so far. i'd be way more pleased about this normally, but buying new shorts all the time is getting expensive!

i like being lazy, so i am blogging in my underwear. just so you know i'm not lying, here you go:
you're welcome. 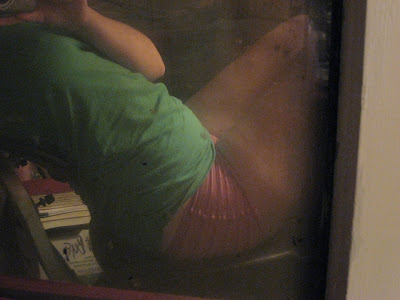 i know, god i'm hot.
shit, i'm out of vodka tea. gonna get more.
i really am going to regret this in the morning. the vodka, i mean. oh, well. 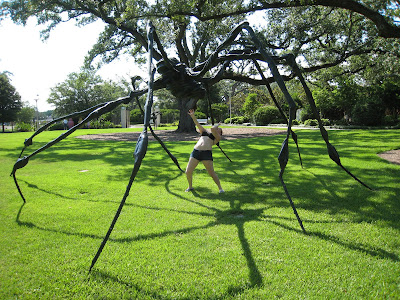 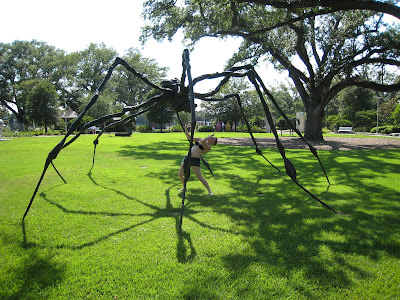 additional last thought to leave you with: i am really terrified of spiders. even when they are not massive.
and yes, i know, i need a tan. know why i don't have one, even though i live in the sunny, sunny south? bar jobs. they = having the schedule of a vampire.
and with that y'all, it's getting light out, i gotta go to bed.
with this vodka sweet tea and a bowl, that is...
: ]
Posted by Satan at 5:56 AM

i always blog in my underwear. in fact, i firmly believe it's the only way to blog/write/be creative, etc...

ps. i love your wings!

have you had seagrams sweet tea infused vodka? i had it this summer in palm springs and i haven't seen it anywhere else. but my friend and i infused our own last week, we just left some lipton's tea bags in a jar of vodka for two days and then added some sugar. perfect for making an arnold palmer!

hey, that's a great idea, andi!
i haven't had the infused sweet tea liquors yet, but they seem interesting. i imagine they're delicious, i'd go overboard, and then hate myself in the morning...
firefly makes some type of sweet tea liquor, i forget what the base is...