fun with stupid (or, the crack spider's bitch)

now this one, you can blame on Jaime.
hon, i just want you to know that i don't normally do this sort of stuff.  and NO, i'm not tagging anyone else to do it, although i will provide random questions you can answer in the comments, if you like.  please feel free to tag yourself.
upwards and onwards...
If you had the choice to know when you were going to die or not to know, what would you choose?
shit yes.  how will i die?  when will i die?  really?  awesome.
then i know that doing this [insert really dumb thing here] is not gonna kill me... bottoms up!  anyone for some evil knievel style motorcycle riding?
What is the one food you could not live without eating ever again?
it starts off round, ends up in triangles, and it's messy.  and cheesy.  and ideally should be the best thing you've ever stuck in your mouth.
in other words, pizza.
Where is the one place you most want to visit on the planet and why?
Scotland and Ireland, because my ancestors are from there.  Europe in general.  Canada.  i like to break rules.
How many times a day do you say a swear word?
HAHAHAHAHAhahahahaha i don't even have enough fingers & toes to count the number of times i swear per hour.
What is the most absurd phobia you have and why?
i am arachnophobic.  no, it's not funny to try & creep me out with spiders.  although this IS maybe the funniest thing i've ever seen.
If all A’s are B’s, Not B, therefore not A. How does this relate to the greatness of cheese?
i'll just start off by saying i HAD to take logic in college, and this is NOT a sound logic equation.  therefore your argument is invalid, no matter what.
by negating B, you negate A, which basically implodes a black hole in your brain, so you go eat a lot of cheese to try and force math out of your brain.  why?  because cheese is the best shit on the planet, and it might even be able to stop up that black hole.  also, math (and logic) problems can lick my balls.
If you could go back in time and undo one event, what would it be and why?
don't snort neurontin.  just don't. whatever you do.  A, because it won't do shit, or at least not anything fun.  B, because OH GOD IT BURNS IT BURNS OH JESUS FUCK MY SINUSES.
no, i have no excuse for why i did it, and this was in the last 2 months, which just proves that i am never going to grow up.  never.
A frat boy, a cougar and a priest all walk into a bar. Which do you make fun of first?
the priest.  he can't get laid.
no, wait, the frat boy.  he has his collar popped, and he should probably be kicked in the balls on general principle.  and it's also theoretically possible that the priest gets laid more than he does.
the cougar is cool.  we can compare plots to ensnare hot young things.  but they must be at or above drinking age.
Fried or deep fried?
fried green tomatoes.
deep fried cajun turkey, motherfuckers.
and now, for some random questions of my own:
if you have 10 million books and not enough bookshelf space, what is the approximate velocity of a LADEN african swallow?
cake, or death?
if a writer works all fucking night long on a project that is essentially intellectual masturbation, when does that person actually masturbate?
how much nail polish is "too much nail polish?"
trick question.  there is no such fucking thing as too much nail polish.  or too many books.  or "too much beer." HA.
you come to my house to hang out.  do you bring weed, scotch, or beer?  show your work.  correct answers will be provided given quantities of the thing(s) that you bring. 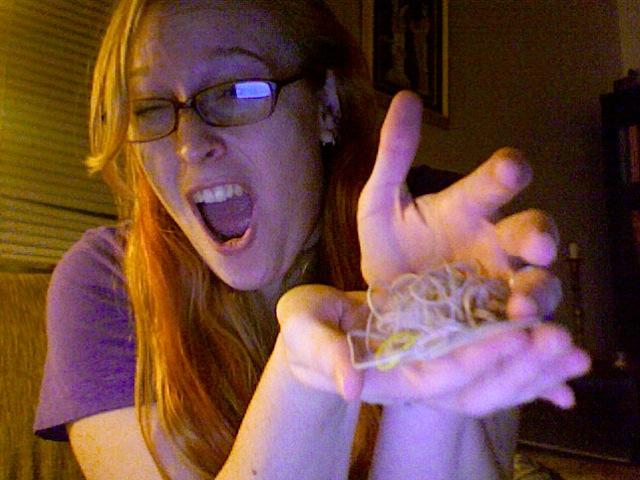 whatever is in your hand frightens me... a great deal.


"I pray to the almighty spaghetti monster"

YES
pray to the almighty Spaghetti Monster!
he is The Awesome.

I was recently tagged, but the answers to the questions would have revealed me as the daughter of Satan. I couldn't risk that. Now that YOU know my true identity, you best keep quiet, you hear. I won't rise to the tagging challenge, I won't!

WHAT????
i have a DAUGHTER???
how in the everlovin flying FUCK did i not notice that?
i'm such a deadbeat mom.
uh... did i miss your birthday this year?