i haven't mentioned my new job yet. there's a REASON.

i work full-time as a coffee barista, for a company (which shall remain nameless, since i am about to slander the SHIT out of them) who works FOR a large corporation (which shall also remain nameless so i don't get sued or whatever, but here's a hint:  "dude, you're getting a shitty computer!").

consequently, i work in a small cafe located in a big corporate maze.  i've never seen the rest of the building besides the cafeteria/cafe and the foodservice offices, but i'd imagine a good majority of the building looks like this: 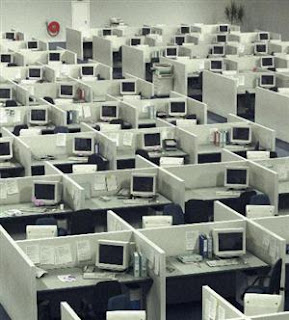 in other words, purgatory.
yes, i knew the job involved daytime hours when i took it, and that i'd probably die with this new phenomenon of sunlight in my life.
and yes, i realized it meant i'd be sleeping from approximately 4am to 7:30 am, on a good night.
(and i don't care what the fuck people say.  no, i can't just "get adjusted" to daytime hours.  it's not possible.  i stay up late no matter how little sleep i've had - either that, or i go home, crash on the couch, sleep til midnight, THEN stay up til 5am...  it's not like i haven't tried, shitbags.  advice: you're doin it wrong.)

it's a coffee job.  things i expected:

getting covered in milk & coffee (and i mean covered, from glasses to shoes, because we are constantly slammed)
scalding myself daily
cranky customers who need their caffeine NOW
picky customers
overly caffeinated customers
being over caffeinated myself...  (which turns out, not so much.  hard to find time to make yourself a drink when you're doing the work of TWO people during a rush!  but more on that later...)

here's what i did not expect:

"write-ups."
write-ups when you clock in late.  write-ups when you clock OUT late.  as in, 5 minutes late.
evidently this company REALLY has its panties in a wad about write-ups.  i guess it's to document EVERYTHING, lest that 5 minutes you were late somehow gets linked to a crime somewhere, or something?
oh yeah - and after 10 "write-ups" for being late?  they fire you.  yeah.

it's like high school, only more nightmarish - because at least in high school, you expect that sort of stupidity.  in the real world, it just makes you want to regress, and stick tacks on someone's chair. 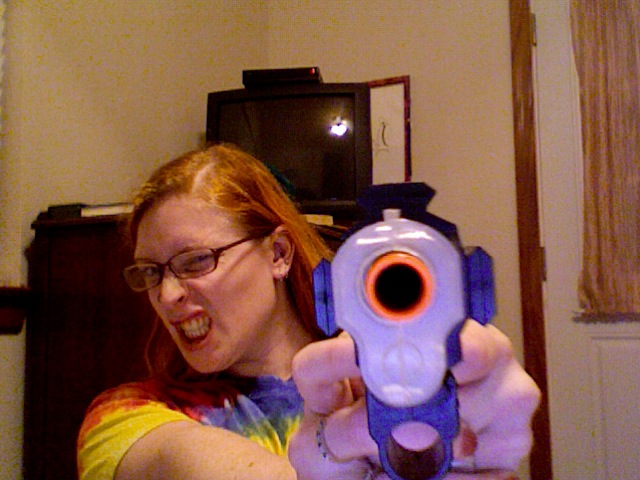 well, fuck you too!
the complete banning of jewelry (oh as IF i'm about to take out 9 piercings worth of jewelry every morning & put it back in every afternoon!  suck it.), which means i either
A).  get bitched at for having my piercings in,
B).  get ALL of my piercings infected, because i have to force the jewelry through if i leave it out all day, or
C). wear clear retainers.  which would be FINE, if i could just sleep in the fuckers.  but  no, they fall out.  so i STILL have the same damn problem. jewelry in, jewelry out (which leads to infection, which leads to anger, which leads to "fuck this, i'm leaving them in.").

(a short aside:  i heal piercings very, very badly.  as in, my body never stops trying to heal them.  i have holes i've had since i was seven, that would close up if i left jewelry out for too long.  all the newer ones have a much shorter shelf life.  15 minutes and my nose piercing would be GONE.) 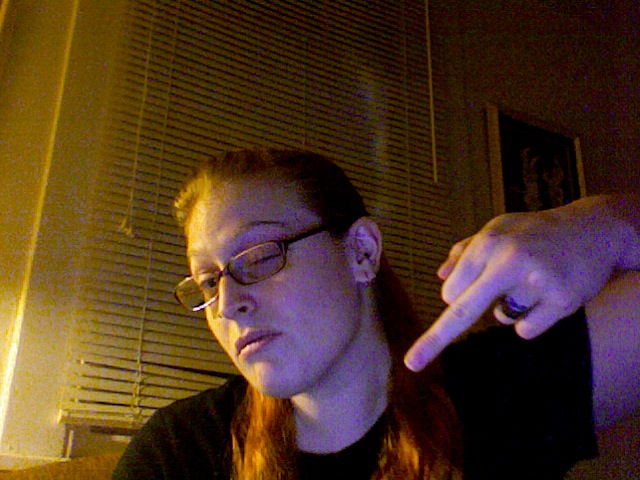 you can take THIS out.
the banning of nail polish.
can i.... can i just say how much i love nail polish? 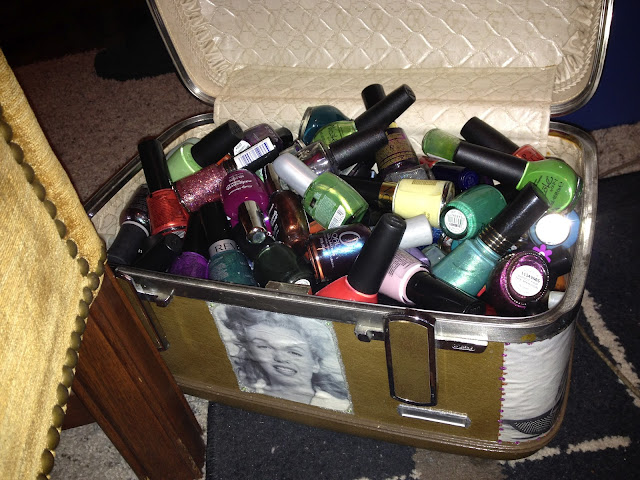 i love nail polish THAT MUCH. 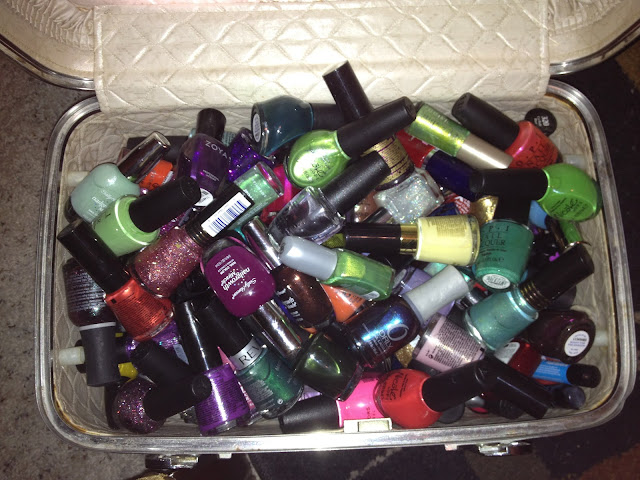 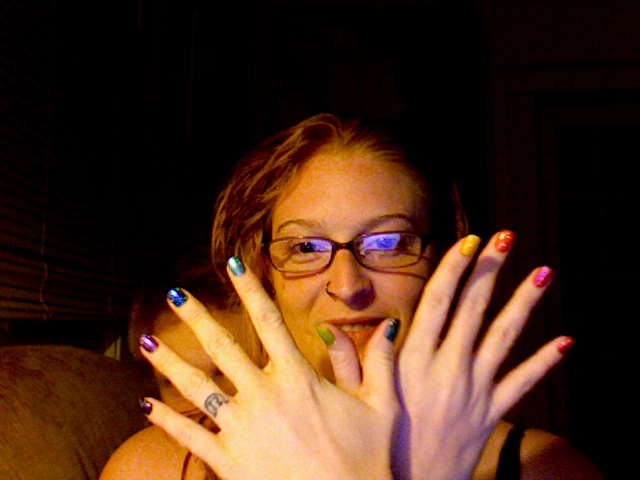 case in motherfucking point.
and now you're telling me i can't fucking use ANY OF IT monday through friday? cocktwat douchebags!  and don't tell me blahblahblah health code, whatever!!!  if it were really that important, don't you think you might have made me GET a health card or something?  but noooo...

strangely enough, this place could give two shits about all the tattoos i have, even the one on my finger, which is usually underneath a family ring i wear (see "gofuckyourself gun" picture up there, you'll see both).  considering they'll "write you up" for earrings or fingernail polish, this is so fucking backwards it's insane. 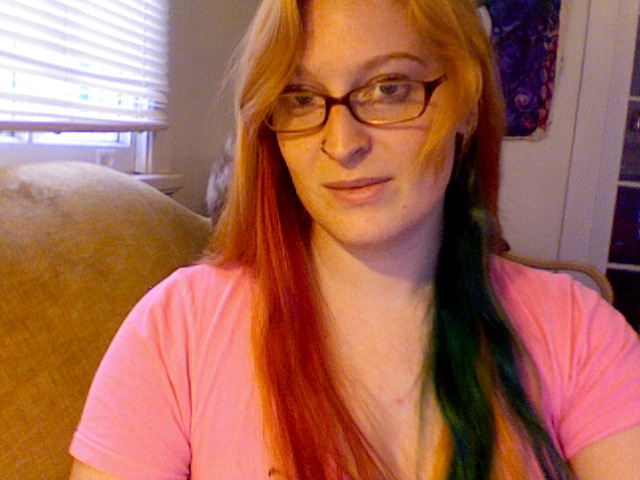 i haven't asked yet, but i'm pretty sure i'm FUCKED if i ever feel like doing this to my hair again.
hey, just in case all this rules&regulations fuckwittery wasn't enough, guess what!  we also get incompetent management!   wooo!

see, the big ass corporate has every employee get a security badge to enter the building & get through various doors.  cool.  no big deal.  the big deal was that it took me AN ENTIRE FUCKING MONTH to get one - because big corp's security said, "we don't have your info. it wasn't sent to us."  and then MY company said, "uh, we sent it like a week ago."
rinse and repeat.  for a month.  meanwhile, a repair guy sent to fix our coffee machine went and got a badge within a day.  literally.  (no, i didn't have smoke coming out of my ears or anything that day, as i went to the security office for the third time that week, why do you ask?)

and of course i'm sure that is ONLY THE BEGINNING to the management fuckery.  hell, i've been here a month.  there's plenty of time for even more ridiculous bullshit to develop. 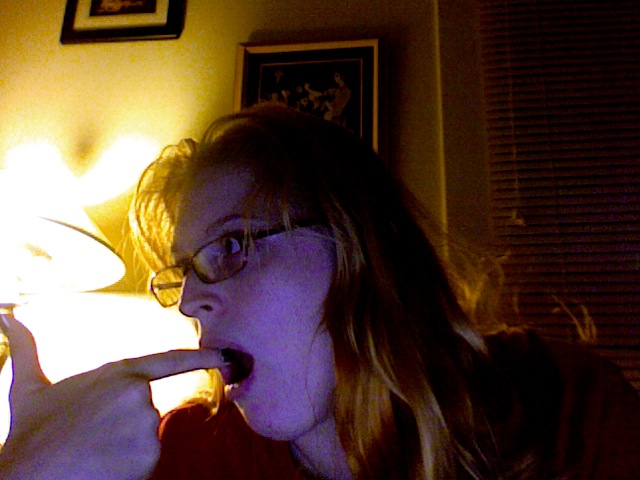 this is how i feel after coming home from work every day!
and now!  and now.  we come to asshat coworker.
one of my coworkers is fucking great.  she knows who she is.
the other....
well.  she's an older, heavier lady, and she evidently feels that once i get there, she doesn't have to do a goddamn thing.  she sits at the register and takes orders....
and i:  make the drip coffee, make all the lattes and espresso and cappuccinos and mochas and chai lattes, and run to the other end of the cafe (where she is, so she could easily snag me more, but NOOOO) for more ground drip coffee and more chai and soy milk and half & half to refill the pitchers out at the bar and clean all the dishes and rinse all the recycling and, and, and....
and then she YELLS AT ME if i get behind?  bitch, i got a line of ten drinks, and you're not helping at all.  brew some fucking coffee or something, don't whine at me about it!
she also evidently thinks i'm an idiot.  "you just turn around while you're steaming or pulling shots & set up your coffee..."
no, dipshit!  that's how you fuck up your milk & let your shots sit and then have to redo shit.  and no, it's NOT okay to let orders go out wrong!  you can't give decaf people normal shots!  you don't fill the hopper with decaf if we're out of normal espresso because your dumb ass forgot to order it!  just.....
ARRGGHHGHGHGHMOTHERFUCKINGCOCKSUCKERTWATFACEJESUSASSMUNCHINGCHRISTONACRACKER
IHATETHISFUCKINGJOB!!!!! 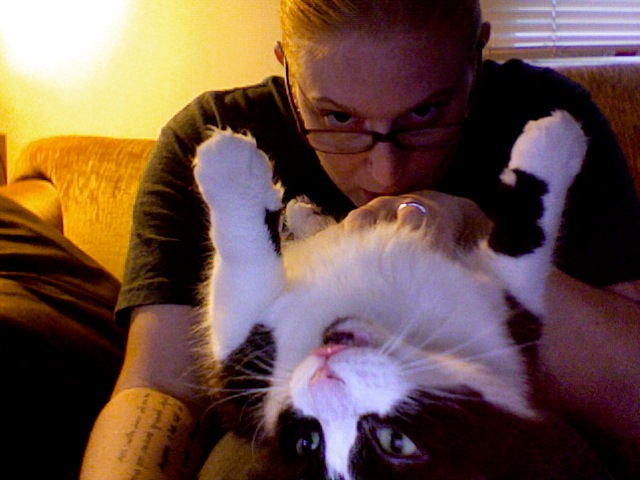 bitch, i will sic my attack cat on you.  she's CRAYCRAY.  you can see it in her eyes.
hey y'all - want to see how long i can be driven batshit insane before i have a complete meltdown? 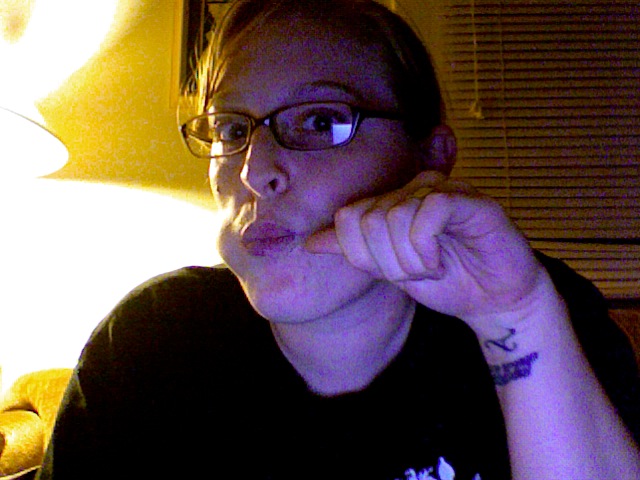 eventually i'm gonna lose it and tell this lady to suck my nonexistent dick.

Labels: at least the customers are nice, douchebag management, fuck my life, now this here is some mighty fine horse shit, you can take this job and SHOVE IT UP YOUR ARSE

Ok so I have nothing like that happening at my asshat of a job but its a close second.

I feel your pain especially the part about policies. Like the write ups? We get a verbal warning, a written warning and then termination. They aren't pulling punches here.. At least you get ten chances to fuck up.

I mean for christ's robe we are just making compasses. I know.. blah for the whole world because we are just that good but really? Gaurd that shit with your life because we have to sign a waiver in the beginning that we won't disclose trade secrets.

And I have a twatwaffle coworker too, who gave me a backhanded apology see Friday Chair Tippin' on my blog.

I am constantly cracking jokes and fuckery because if I don't it makes for a sad day otherwise.

They are lenient with piercings, i.e. they don't say shit about my tongue ring, but would if I had an eyebrow piercing or lip piercing. They don't say anything about my tattoos because well they can't see them unless I am wearing something revealing .. my wardrobe is jeans and t-shirt.

As for you not getting a security badge after a month well it took my work 4 months to give us a handbook/living document. I was like really.. if the labor board heard about this we could really use it against them for loophole reasons.. such as if they decided to fire me for something in the handbook and I should have known about it from the day they hired me, well I could show the date of when I got the stupid handbook and say umm I don't know.. maybe because I didn't get the hand book til then?

There are good days and bad days and right now I am painting which makes me happy but not enough that I would stay if given the opportunity to go somewhere else.

yeah. i don't have a handbook either. i got a vague "think they mail that stuff" and then.... nothing. so of course, i have no idea about any of this write up stuff until i come in late.
i just.... have never wanted to quit a job more in my life.

I was distracted by all the pretty I was looking at. You are very beautiful. I am sorry your customers are such assholes. Next time I buy myself a cup of coffee, I will make sure to tip extra generously. The thing is, I always do, but feel like I shouldn't. The baristas are always so mean to me, and I am sure it has to do with all the crap they take from others, but I am always so nice to them. Done complaining now. Thanks for listening.

dude.. that fucking blows... I know for a fact I could NEVER be a barista cuz I would go insane. I don't handle people well.. especially people before they've had their caffeine.. those people are crazy, dude.

good luck... if you need someone to bitch at, I'm always around.

OMG! So well said. Love the pictures too! Why do so many (ALL) jobs suck a giant wad of donkey spunk?! When I did my stint in coffee hell they weren't that strict at the time. I am actually speechless! A write up for being 5 minutes late, you'd think you strangled a litter of baby kittens while raping a cancer patient.

it's not the coffee part i hate, it's the corporate piece of shit company that i work for that i hate!

Yo! Ho! I just gave your bitchin blog a Versatile Blog award. You can check it out at www.pullmyfunnybone.com.