for as long as i've been alive, my dad has been an antiques dealer.
however. after my mom divorced him, he became just a tad more flamboyant.
or a lot.

this was my freshman year of college (that'd be 2003, y'all), and the first time i'd been to his bachelor pad. i was expecting antiques everywhere, as per usual. this was what i wasn't expecting: mannequins. everywhere. mannequins on pedestals, mannequins in the corner. and, the piece de resistance: Mitzie.

Mitzie was the only mannequin with a name. she reclined in a red evening dress and silver heels, on top of the grand piano. Mitzie had a periodically changing hairstyle - from red, to blonde, brunette and back again. she wore Mardi Gras beads, and green for St. Patty's, etcetera. she was also impossible to miss, from the moment you walked in the door.

my not so heterosexual ex-boyfriend took one step into dad's new house, and grabbed my hand, hissing, "omiGOD honey, your daddy's a fag."
"no he isn't," i responded. "he deals in antiques." which might explain some of the naked greek men in the house....but surely not all of them. to be fair, there were quite a few.
"a hundred bucks, he's a homo." ex-boy muttered. the bet was on.

it only took a few days to lose myself a hundred dollars. all the other evidence might have been questionable, but when i found the cosmogirl magazine with ashton kutcher on the cover in his nightstand drawer, next to the technicolor lifestyle condoms and lube, i knew i'd lost this one, and good.
"okay," i conceded. "my dad's a homo. this is going to be AWESOME!!!"

and it was. it was very awesome.

FACT: when coming out to your mother as a young college student, it always helps if your mom has just recently divorced your dad for being gay.
my mom's reaction, instead of being "get out of my house!" was more like, "oh god, not another one!"

it was as smooth as i could reasonably expect.

anyway, things have gone along more or less smoothly ever since, as smooth as a southern family with two non-heteros gets, really. dad's still trying to figure out how to be simultaneously christian and gay, but he's working on it (i know, i don't get it either).
dad has a revolving parade of boyfriends, mom remarried an AWESOME guy, my brother is mostly non-scarred, blah blah blah.
i am still the "black sheep" of the family, eschewing morals, sexual mores, and pretty much everything else. (how else am i supposed to have fun, here?)

heh, try this for fun: come out as gay....two years later, come out as not-quite-as-gay-as-previously-assumed, then come out as poly-amorous. date a married couple, and introduce them to the folks.
throw in a bit of odd paganism, and if your family doesn't spontaneously explode, pat yourself on the back, big time. you win the best family award! (i really do love my family...despite how it may appear in this blog...)

so anyway, back to regularly scheduled plot before side notes....

my personal favorite mannequin OF ALL TIME was this guy: 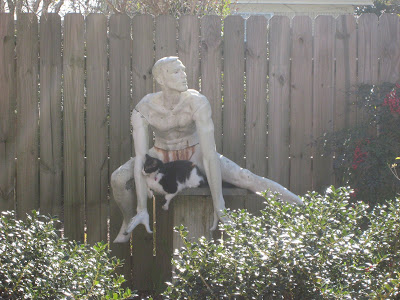 for the longest time, dad had him stuck into a pedestal with a piece of rebar up his ass. eventually i think one of the neighbors might have complained, and he removed the rebar and moved him into the back yard, as shown in the picture. (the cat is Roxy...more on her later. evil Fuzzbutt.)

since dad is selling that house (see previous post), i think my favorite mannequin man is finally leaving the show.

my dad's not giving up on the fabulous factor, however.
i sincerely apologize for not having a picture of this. it is AMAZING.

my dad now owns Liberace's piano.
the piano in question didn't used to be Liberace's. it used to be a perfectly normal black grand piano.

evidently dad was bored, though, and decided that what he really needed was to get a mirror cut for THE ENTIRE TOP OF THE GRAND PIANO. 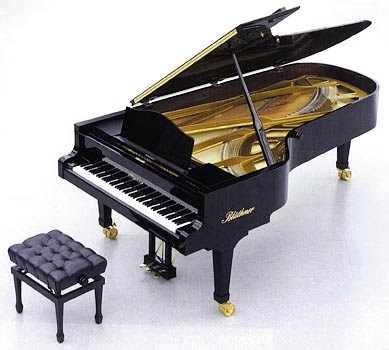 see example piano. now imagine the top closed, and the entire damn thing covered in a huge mirrored top.
he then got these fantastic candlesticks that look a lot more like miniature chandeliers, and stuck them on top. the entire half of the living room fucking sparkles.
it's fantastic.
as soon as i get over to his house, i thusly promise to take pictures of this marvel.
Posted by Satan at 12:43 AM