who is Satan?
why is Satan going to Sing-Sing, oh prison of notorious repute?

these questions at least, i can answer. 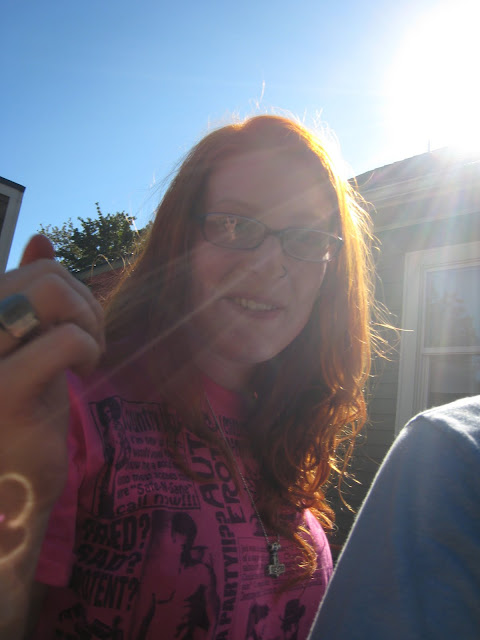 I am Satan. (not to be confused with the devil, that's another bugger entirely.)
you can blame me being known as Satan on the brother of this guy i used to date a million years ago - the brother, who was commonly known as B.J., hated my guts.
(i know, i have no idea why any sentient being would willingly be called B.J., male or female. i'm sure he was a William John or some shit, but STILL.)
anywho, this B.J. fellow really, really hated the fact that i was dating his brother. i still don't know why. but one day i got a phone call at his brother's house, B.J. answered, and turned around, fixed me with the EVIL LOOK OF DOOM and said, and i quote,
"phone for you.....SSSSSAAATAAANNNN," with the most evil hissing voice i have ever heard.

the nickname, to put it mildly, stuck.
so, i am Satan. i'm a red-head. it's not precisely unfounded.

second question: Sing-Sing?
sing-sing. because Satan has a new job.

not at a prison, although i'm sure that would be wildly entertaining. this particular job is far better than some others i've had...such as convenience store clerk, poorly-paid law office gopher, and more recently, Being Unemployed. the job itself, i'm sure, will be all sunshine and rainbows, as it's in Disaster Recovery.
my issue is not with starting a new job...it's the environment. i'll be working in corporate hell. corporate, to me, definitely equals Sing-Sing, if only in my mind. the reality may be wildly different, but every time i get this horrifying cubicle vision.... ::shudder::

i'll be doing something vaguely administrative, i assume, and using my oh-so-handy B.A. in Creative Writing. how, i do not know. part of the job is possibly meeting and schmoozing government officials. (why my boss thinks i can do this is beyond me.) therefore, i must wear office clothes. i imagine they're going to want me to look like this on any particular day:

fair enough. but here is what i looked like, just this afternoon: 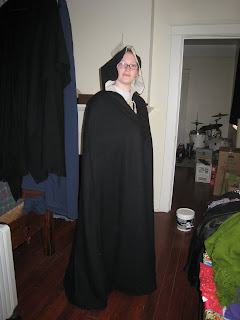 you see my quandary? i don't own office clothing. i own things that wouldn't be out of place in renaissance fairs, furry conventions, belly dancing classes, and drugged out hippie festivals. i own clothing gutter punks would wear. my uniform is a ratty band t-shirt and paint-encrusted, jeans with holes.

i went to this job interview in an ACTUAL SKIRT, the only nice heels i own, and ACTUAL MAKEUP. i may have set up some fairly high expectations. whoops.
so i went yesterday to a thrift store, and found some cardigans. cardigans, because i have tattoos on my arms, and i have NO IDEA if mr. bossman would give two shits whether i'm covering them up or not. (i do live in the south, so i err on the side of people being closed-minded and rather prissy about things like tattoos. i assume they won't want them cluttering their office, and i always feel great if i turn out to be wrong.) cardigans, because i imagine if i find some really cute dresses i might conceivably want to wear into the office, i can P.C. them up by wearing a button-up sweater, and sorta, kinda, blend into the cubicle environment. maybe.

Labels: welcome to the BLOG OF DOOM, who is Satan, why sing-sing?, WTF

I love your comparative pictures... Sadly, my office apparel now equals my cape, belly dance and renaissance collection. You'll have to get by on force of personality.