i have two favorite animals: horses, and cats.
both of which i am allergic to. naturally, i think this is vastly unfair.
this is one of my favorite activities: 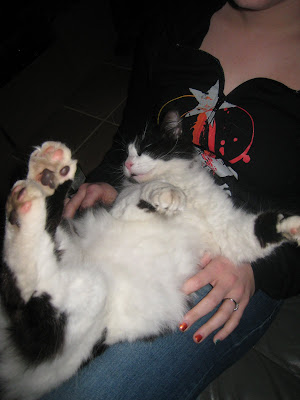 allergies don't stop me from doing much other than breathing, though. i live with a cat, Roxy. it's not a good idea to let her near my bed or clothing though, so she lives mostly outdoors, and in the kitchen. or the living room, where we block every attempt at snuggling on the couch. i don't want my couch to make me sneeze.

we live in a shotgun style house, as is common in new orleans. thus, our place is basically a long hallway. you have to go through all the rooms in order to get into the kitchen, and our living room is on the opposite end.

naturally the cat (Roxy) knows this, and takes every opportunity to show up on the front porch, which means if we let her in (and she's really fucking persistent and whiny about it) then one of us has to chase/wrangle/carry her to the kitchen and shut the door, so she doesn't immediately make for, say, my closet, where she can rub her allergy-ness all over my clothing.

it's not a joke, it really happens. and sometimes, this happens, too: 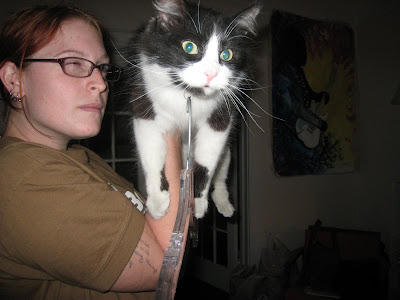 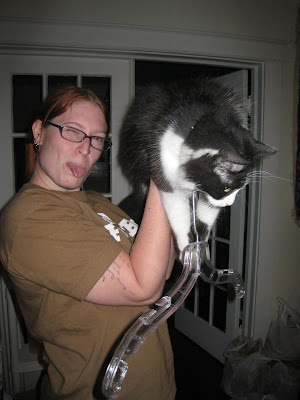 she is the Fuzzbutt. and the Fuzzbutt is evil. and a bit confused, too.
she's the Matt's (see previous posts) cat. and she has been moved from Chicago, to Portland, and then all around the whole bloody city of Portland, then Pensacola, and now New Orleans. i think she loves it here, but it's hard to tell, really. she's a gypsy cat.
and evidently that's not just a saying. Roxy was given (note i didn't say chose, here) to the Matt by an ex of his, and he explained to me that she (the ex) was an actual gypsy, heritage-wise. so, by the very definition, Roxy is a gypsy cat. which at least is interesting, if not technically true. (i have no idea if it's true...not my cat).
so Fuzzbutt is somewhat like that kid that your friend ended up pregnant with by accident...not precisely planned (or wanted, up front) but loved, at least.

since we keep her mostly in the kitchen or kick her outside most of the time, i'm starting to think that she believes she's homeless.
this was our first indication that we might have a hobo cat: 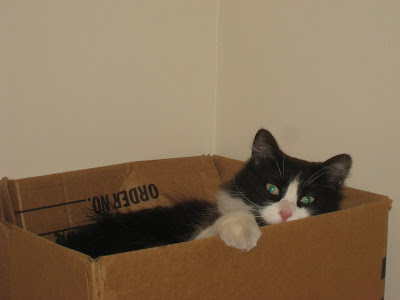 i told the Matt we might want to get a cat bed or something, lest she start acting really homeless, and stop bathing herself. he said, "aw, fuck her," which i took to mean generally, "let her have the box, i am poor." or something to that effect.
thus Roxy has a box. probably best anyway or i'd have to start washing a cat bed frequently so as not to be allergic to my fucking kitchen. ridiculous.

during the night and early morning hours (most of which i'm awake for) we have a revolving cat parade on our porch, due to the food we leave out for Roxy so she (presumably and hopefully) won't bug the shit out of us every time she wants to eat three pieces of food and scamper back outdoors. i don't know if it'll make Fuzzbutt stop harassing us, but it does have the entertaining effect of drawing every cat on the street, most of which are vaguely socialized at best. i've tried to get pictures, but they run too damn fast.

naturally, Fuzzbutt protests this stealing of food, so we also get to watch her chase all the other cats. it's either that, or she ends up in the kitchen all night. it's been like that a lot recently, so that now every time i get up out of bed from reading to go to my bathroom, i see this: 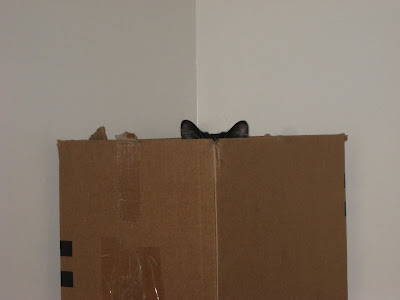 ears go up like a periscope, she realizes "oh, it's just you," and she curls back up and ignores you.

either that, or she MUST have all of your attention. ALL OF IT. IMMEDIATELY.
in which case, no matter how badly you have to go, you can't pee until you shake the cat off your leg and sprint into the bathroom quickly, lest she decide she must sit on you while you're trying to shit or something.

to the end of destroying this behavior, i've come up with cat twaddling. goes like this:

walk into kitchen. Fuzzbutt perks up, and gives you THE LOOK which means PET ME NOW DUMB HUMAN, OR ELSE. i walk over, give her a two-handed scratch behind the ears really fast, and while she's basking in this, RUN LIKE HELL to the bathroom.
it seems to be working, so far.
the downside is, if you skip the cat twaddle, you get this look: 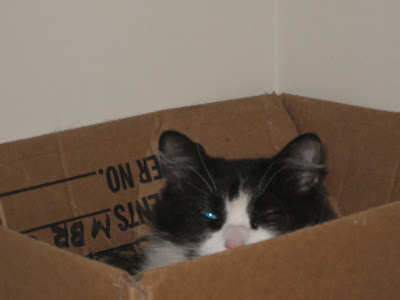