i write this post from a friend's house, a friend who has been so wonderful to me...
why, might you ask?

well, the short version is, my next-door neighbor is renovating his house.

the long version, is thus:

i like my neighbor joe. he's a nice enough guy. he's also lived in our neighborhood since he was a kid, so i figure that gives him privileges that we renters don't have. so when he told us he was going to renovate his house, i said, "good for you!" and meant it.
that, of course, was before i didn't get a good night's sleep due to construction, for the last month +.
i mean, i am a VERY, VERY sound sleeper. i can handle hammers, and assorted demo work. i can handle the loud music. but after it reaches a certain decibel level, no one can sleep through this crap. but i understand, renovations sometimes must be done. so i wasn't about to complain.
i could even handle the nail gun, which made me wake up panicking, sincerely thinking my house was being shot at. (yes, our neighborhood does occasionally get shootings, but not during the day...and not next door.)

what i can't handle is the shouting. these guys are all family, and their preferred means of communication is at the absolute top of their lungs, and that's when they AREN'T arguing. if they are arguing (and they argue every day), gods, i bet the entire block can hear them.
keep in mind, this is new orleans. shotgun houses. most of this work is all taking place ABOUT 5 FEET FROM MY FUCKING HEAD.
but i've been Good Neighbor, and i have not complained. i have kept the dirty looks (as i walk out to the car to go to work in the "morning") to a minimum. i understand they need sunlight to work. it doesn't help that i do most of my sleeping in sunlight hours (how else would i stay so vampirically pale?)
no, all was reasonably non-psychotic in my little head. yes, the construction next door was Fucking With My Allergies/Asthma, but not in a lethal way. in a dusty way.

and then, THIS HAPPENED. i will let the picture do the talking. 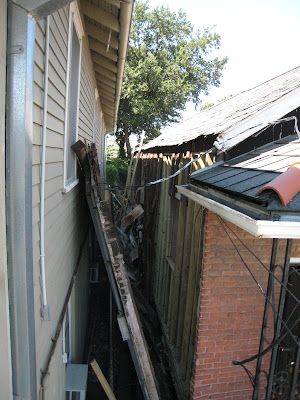 my house is on the left.
"why satan," you might ask, "is that your neighbor's ENTIRE FUCKING WALL leaning against your house?"
yes. yes it is.
only me.
this shit only happens to me.

completely ignoring how the hell this structural weakness might happen, (answer: rampant termites) i am completely stunned by the fact that it remained in one piece (especially after it impacted with our house and shook the walls), until they had to bust it apart and carry it to the dumpster.
i chalked this up to a picturesque story to tell pretty much everyone, and left it at that. after 24 hours, though, it was quite apparent that i had no choice but to think about it more.

see, i am allergic to EVERYTHING except foods and medicines. by which i mean: cats, dogs, horses (REALLY?), grass, roaches(possibly other insects, who knows...), pine trees, oak trees, probably all trees, molds, mildews, dust, rats (this i found out by owning them... didn't know that before), hay, probably a bunch of flowers, and who knows what else.

now, i am allergic to a bunch of things, but i'm not bubble girl. i live in a dusty old house, with windows that don't seal properly. i have 2 (3?) cats, and 2 rats. i am not usually in respiratory distress. it takes something really terrible to give me this kind of reaction. the last two things that made me this sick were, 1. a house with asbestos insulation IN OUR HEATER, and 2. a carpeted house with 7 cats. i lived in those houses. i am merely close to this one, and it has almost killed me.

i don't know what the hell is in joe's house (my guesses are black mold AND asbestos), but within a day, it made my asthma flare up so badly that i was literally afraid to sleep, in case i quit breathing in the middle of the night, and didn't wake up.
it cost me $125 + who knows how much else the Urgent Care clinic will bill me, to be able to not drown in my own lungs. i am still recovering in a friend's allergen-free house.
as we speak, the Matt is putting plastic sheeting over every single window in our house, and using rolls of tape to anchor it to the walls. i have my HEPA filter going full blast... i am still afraid that i will not be able to stay in my house.

oh, yeah. best part? after he's done with the walls, joe plans to re-roof the fucker. can we guess how much shit i'm allergic to might be in a 100+ year old attic? i shudder to think. he might be done by december, according to his estimates.
yeah? i may be moving...

so check out some progress shots: 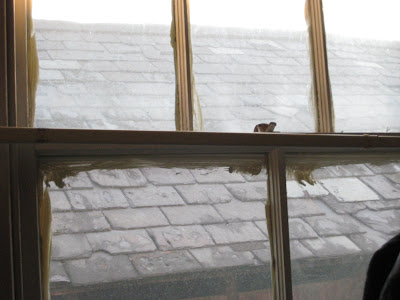 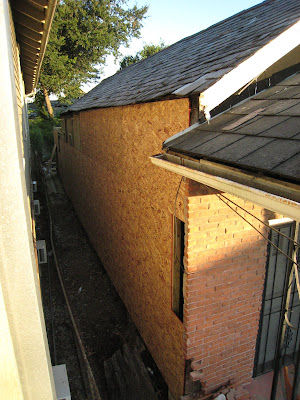 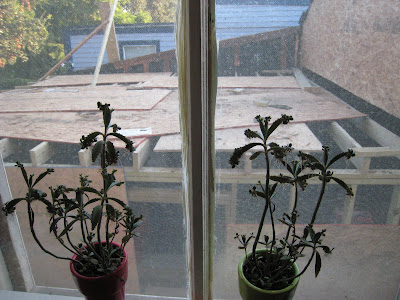 well, one is of the (beautiful, awesome) slate roof that he will be replacing. the others are of the construction.

i joke around a bunch, both on this blog, and in general, in my life. i don't joke about asthma. it has almost killed me a couple of times, and it is not pleasant. so when i say i felt like i was going to die the other night, i mean it. that short of breath. that afraid to lie down.

joe, much love for you man, but i think i'm declaring a neighbor war.
maybe you'd like to pay my medical bills?
because, i can't fucking work. haven't been able to for almost 2 weeks now, due to all this shit. i don't have any insurance. and i CAN call the board of health on you for doing your demo in a completely illegal fashion... i think the air health level is definitely not kosher.
i am a very healthy human being normally, and you have deprived me of my health, and my income. not cool.
i have to think more about a plan of action here that doesn't involve hanging out my window and shooting with a BB gun (because i can't open my windows anymore... or shut off my a/c and enjoy the cool weather like i planned...)
because i'm still at my friend's house, still coughing like it's going out of fashion, and i need a better option.
Posted by Satan at 2:31 AM

On a positive note, at least since you're allergic to so much, you can force your S.O. to do shit all the time by blaming it on that.

did I tell you that I go to NOLA every year to build houses with Habitat? I do.

sounds like your neighbor would be better off tearing the house down and starting from scratch.

yeah, there is a lot to be desired in housing around here, and the mold is especially toxic -
but evidently it doesn't bother the neighbor, he is working without even face masks...
it boggles my mind.