tonight, i went to dinner with my dad. and that is NEVER boring.

my father is a wonderful and strange individual.

for example, he comes to new orleans at least once or twice a week for business, and every week his routine is exactly the same.
he leaves his house in pensacola, drives through alabama, making sure not to buy anything (pay attention to that, it's important), and goes through mississippi into louisiana, where he stops at slidell.
what does he stop for?  a daiquiri.  (of course!)

then he drives around town, with his daiquiri, doing business (buying/selling antiques).
as he leaves and goes back through slidell, he gets another daiquiri.  and by "another," i mean, he buys one to drink, and three or four to pop those suckers in a cooler.  because they are oh-so-nice to enjoy at home - or on the beach, since he lives so damn close.  (shakes fist)
these are large daiquiris, mind you.  32 ounces. one will make you feel quite nice.  (so far, we're up to two daiquiris - no, my dad doesn't care about driving while intoxicated, why do you ask?)

on the way back, he stops in biloxi to get gas, and eat at mcdonald's (gets the same thing every time).  then he scoots through alabama (because he got a couple of tickets there once, YEARS ago, and "won't give them another red cent" and refuses to buy ANYTHING there), and goes back home.

i have ridden on this trip with my father many times.  many, many times.  and not once have i seen him deviate from this pattern.  NOT ONCE.

now, this exact pattern started right after i graduated from high school.  i mean, he's been doing business in new orleans since i was a child, long before i moved here.  but i think he got fed up about being "good" (ie not drinking around the kids) right about the time his marriage to my mom disintegrated, and this pattern emerged.  and since i turned eighteen, he has had no qualms whatsoever about boozing it up in front of me.  or buying me whatever i wanted - be it wine, daiquiris, or a handle.

i tell people regularly that my dad is not a great father.  and it's true, he's not.  if you want all that parental stuff, he's the pits.  he has his own life, and he's not terribly invested in knowing all about yours.  he's asked me more than once if i'm "still dating that guy" that i LIVE with.  The Matt and i had a good laugh over that one.  and this IS the man who, when he first met him, asked Matt if he smoked pot.  and when Matt said no, then said, "then why the hell are you dating my daughter?"

but as a friend?  he's hilarious, and fun.  he likes to do drinks and dinner, and he hangs out with all these funny older ladies, who think he's the shit.  (i wonder if they know he's gay???  probably, but who knows.)  he's the type to go listen to the free music in the park - and bring with him an entire cooler of booze, and two very large silver candelabras, which will drip wax everywhere, including the food.  and then he will want to dance on the sidewalk.  there is no chance of blending in, in public - but who the fuck cares?  i'm the bitch with the silver candelabras.

and as you might be able to tell from this here blog, i'm not exactly the most subtle person, myself.

the reason i mention all this is that it's relevant to my day.  i often go at least a month at a time without seeing my dad, despite his weekly presence in my city.  mostly because he's doing business and wants to get out of the city by 4:30 to beat traffic, and i usually wake up at 2pm or later.  but also just because we're not the type to hang out all the time.  but when we do.... whoo!

we went out for dinner tonight, which was yummy and all, but who cares.  what was interesting was the conversation:  "is that a mariachi band?  wait, what is the saxophone doing in there?"  (answer:  yes it was a mariachi band, and the sax player was busking across the street)
other discussion topics:  the (completely separate, and until now unbeknown to be something we shared) times both of us had chipped teeth, and used a nail file to even out the sharp edges...  "how vulgah!"   "well, i get that from you, obviously."
the latest rescue my dad's taken in...  "where did you put him, the floor?"  "well no, he was in the bed - but you know it's a queen size, and i barely noticed he was there"  (yeah the fuck right)
and - my dad selling weed to facilitating the procurement of medicine to the man who i've known since i was a small child - one of the many antique dealers i've known over a large portion of my life.  also the man who made me want to play the piano as a kid, by playing Fur Elise every time he came over.  i still love that song. 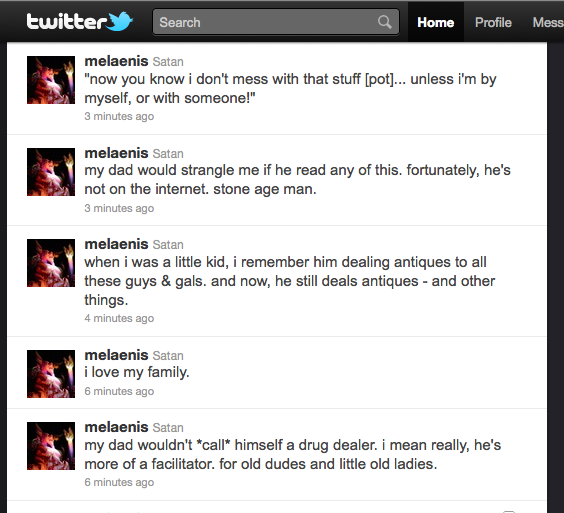 "unless i'm by myself or with someone."  snort.  this is not only true, but it's an old family saying - used whenever we're accusing one another of doing something nefarious, or hilarious.
i really don't know where that came from, whether it was part of my dad's family from way back, or whether they coined that in our household.  either way, it has stuck for a long, long time. 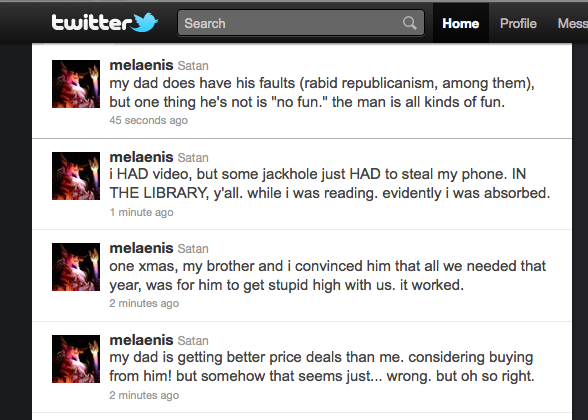 so yeah.  that's a typical dinner with my dad.
i have this sneaking suspicion that people will never believe any of this shit unless i write it down.
because a lot of my friends give me the "yeah the fuck right" looks, when i'm talking about my family. i just want to bring a tape recorder, sometimes.
speaking of which...
i do have one.
(oh thank you, Matt... thank you.)

for dinner (besides the food, obviously) i had two strawberry daiquiris, and he had two margaritas.  (hellooo, happy hour.)  but naturally, he wasn't done yet.

on his way out of town, heading off to buy his daiquiris, dad offered to stop by the purple daiquiri shop on St. Charles, but i said no - the taste is far inferior to our favorite shops (which are only in metairie, and slidell, far as i know).  "you know i like booze, but you can just taste it TOO much in those," i said.  (plus, a medium will put a really, really severe wobble into your step.)

of course, dad agreed.
he would.  after all, he found the best daiquiri place i know.

speaking of.  don't suppose anyone would give me a ride to metairie?  and about $12?  i have a few daiquiris to buy.
Posted by Satan at 1:32 AM

Labels: my dad the drug dealer, no not really but yeah kinda, yummy foods

Drive through daiquiri places are SOGOODOMG. I was craving one last weekend and made Andy stop on the way home from work. :)

I'm glad you got to have a fun dinner with your dad. My parents would NEVER drink, ever. The most I've seen my mom drink is one wine cooler, and I'm pretty sure that made her slur her words a little. My goal is to get her tipsy at my wedding....

I miss daiquiris, and drinking. I can't wait to get this parasite...baby out of me.

i would be the worst mother in the world. i would still want to drink and smoke and just have my life not change during pregnancy, and after.
to prevent this awfulness, i have me some birth control that won't expire til 2021, and also plans to get sterilized ASAP. i recognize my terrible maternal instincts for what they are: signs to not do it, ever.

but that's just me. hey, happy baby! and once you're done hatching him/her, you can drink your little daiquiri heart out.
: ]

@Sara, i used to think that very thing about my parents: "my parents won't ever drink."
it was something magical that happened... something... divorc-y. yep. also the getting laid. i am pretty sure that's the magical key to nutso families like mine.

So ums, let's drive to Metairie for daiquiris soon.

I'm saving up for C3's vasectomy.

don't blame you, @aly! if i thought for a second i might be with one man for the rest of my life (bwahahhahaahahha, good one!), i might do the vasectomy thing. as it is, i'd rather take care of it on my end.