The Summer from Hell 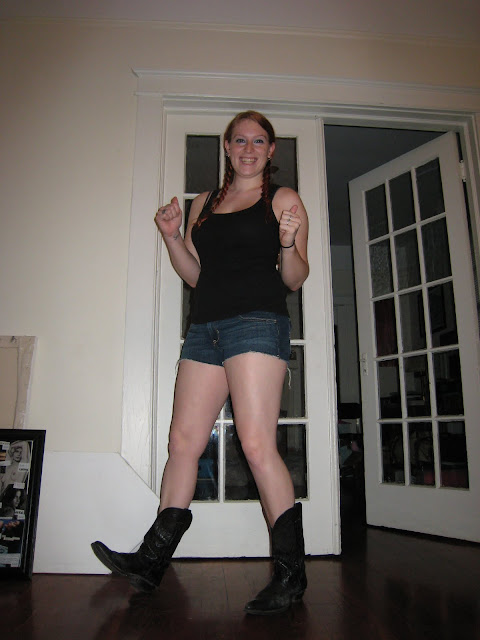 last summer, i was desperate for a job (hmm, not unlike this year), and i finally got one:  on Bourbon Street (much to my dismay) - as a "go-go" dancer.  it wasn't a stripping job.  i've done that too, as you all know; this one was worse.  i was hired on at the Bourbon Cowboy.  it was pure hell and misery.  i had to listen to the same shitty songs every single night, and i unintentionally learned every lyric to all the country songs i've always wanted to forget existed.  it was high summer, and the entire time i was dancing and waving those stupid 3 for 1 signs, i was dripping with sweat.  i hate sweating.  i'm not from the south originally, and the humidity down here makes me feel like i'm wearing a thick, wet wool blanket in 120 degree assholeness.  ahem.  anyhow.

last summer they also opened the Bourbon Cowboy 2 - as if one wasn't enough.  this one had a stage, and before they started having live bands, they had us "go-go" dancers dancing in the open windows.  evidently i didn't have enough opportunities while dancing in cowboy boots, cut off jean shorts, and tiny tank tops, to get harassed by every drunk idiot that walked by.  at least the other Bourbon Cowboy had our little dancing stage away from the street, where bouncers could shoo away the creepy guys.  they switched all the dancers back and forth between the two Cowboys, and i ended up at Bourbon Cowboy 2 a lot.  the dancer "manager" hated my guts for some unknown reason, so she wanted me out of "her" club (Bourbon Cowboy).

One night, as i was dancing on their stupid stage at Cowboy 2, (three feet away from the open windows, mind you) some stupid goddamn popped-collar frat-boy douchebag LITERALLY climbed through the open window, got onto the stage, and slapped my ass SO HARD i stumbled forward a bit.  i whipped around, grabbed him by his fucking collar, and followed him out of the window - choking him with his own collar.  the bouncer at the door was yelling - "HEY! what the hell! WHAT DID YOU DO???" he screamed at the frat boy - because i am not the type to start choking out a guy with his own collar on a whim.

i was yelling at the popped collar douchebag - "WHAT THE FUCK IS WRONG WITH YOU???" while alternating between pummeling and slapping him with the hand that wasn't choking him with his collar.   "i didn't do nothin' man, she just went all crazy on me!" he said to the bouncer. "BULLSHIT!" the bouncer and i yelled, simultaneously.  the bouncer had to forcibly remove my hand from the guy's neck, and pushed him off the sidewalk.  "Get the fuck out of here!" he said. then he turned to me.  "You all right?" "NO i'm not all right, that fucker just assaulted me!!!"   i stormed up to management's office, and commenced to screaming.  the fucking asshole bullshit male manager basically told me that "you're a girl on Bourbon Street, people are gonna do shit like that, what do you expect?"   Well.  i didn't take that sexist bullshit lying down.  i started screaming louder.

and that's my story of how i got fired from a shitty club on Bourbon Street, because i wouldn't take getting assaulted and sexually harassed lying down.   i was glad to go.  and i was even gladder to go out swinging, and choking some frat-boy dipshit with his own shirt.  that part was worth every moment.

that there is Bourbon Cowboy 1.  the "go-go" dancers also had to ride the bull, if it was slow, to try and attract other riders and dipshits into the bar.

i can ride a hell of a lot better than this chick.
Posted by Satan at 5:58 PM

Labels: Bourbon street is Bullshit, getting fired for a good cause, swinging mad, things that make me want to beat up frat boys on principle

Tackling the douchebag had to be one of life's most satisfying moments for you. It would have been for me.