if you don't know who the Merry Pranksters are, i suggest you do some research

so, my friend C calls me, and asks what i'm doing for the next month or so.

"nothing," says i, stupidly.

"awesome. you can be office organization for this music festival i've become involved with," says C.

that is how it started. one minute i was quasi-homeless, living rent free in portland, and the next, i was all of a sudden embroiled in a hippie festival.
"i'm just saying, you are STUPID to get involved with this," said my roommate. and oh, how right he was, except he didn't get to meet all the cool people i did, so there...i think.

keep in mind, i have no car, so once i get down to eugene, oregon, i am stuck there.

my first task: recruit as many of my out of work/nothing better to do friends as possible... this was easy. most of us were unemployed.

second task: go to bumfuck nowhere, the proposed site of the music festival, and begin clearing land. also, trying to figure out how to kill all the blackberry brambles, or at least enough to make a pathway through them to various sites to camp by a river...

this would be when i went to the hospital for dehydration, july 3rd, as a result of all this madness.

yes, part of it would be exertion, although it wasn't that hot, and i didn't hack that many blackberry brambles with a machete.
most of it was the imbalanced diet, and the fact that our water source was suspect, and i didn't drink nearly enough water. (well, i was also living in a tent, and it is much easier to just not drink as much, instead of having to go piss outdoors regularly...)
also, everything else may have been exaggerated by me doing a bit of ecstasy...
well, whoops. bad timing, i realize.

everything piled up into a mean case of dehydration, which the hospital ignored (instead, ordering stupid tests that had no bearing on my case)
and sent me home, sans-fluids, to get well on my own.

Note: if you are a person who generally eats a lot of salt (and i really am, i am a salt fiend), if you go without the salt for a while, your body may rebel furiously, putting you into the ER, and making you very ill.
after i came home from the ER, i continued to hurl up everything i ate, until one of my very smart friends asked me, "what were you not getting that you usually eat on the trip?" and i said... "salt, duh!"

i ate a handful of salt, and voila! suddenly i was capable of eating and not hurling it back up. this was a valuable lesson.
#1: if dehydrated, unless close to actual dying, don't bother to go to hospital,
#2: if dehydrated, eat some salt, you will feel better almost immediately.

after our brief stint in portland, we headed back down to eugene, and resumed the hippie life - this time, in the organizer's house, with a bunch of others, sleeping on the floor. actually, we set up our tent in the house, because it seemed expedient at the time. little did we know we'd get kicked out, eventually.

what i did for the music festival amounted to bullying, basically. for the hemp fest, i'd walk over, state i needed (X) amount of passes, both VIP and staff, and i'd generally get them. i was anygirl...they had no reason to believe me, but i did get things done. i'm awesome like that.
some pictures of the hemp fest... 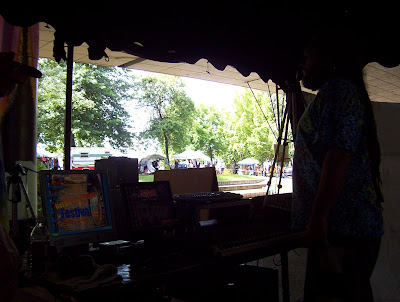 behind the scenes backstage/sound, where all the awesome food is, 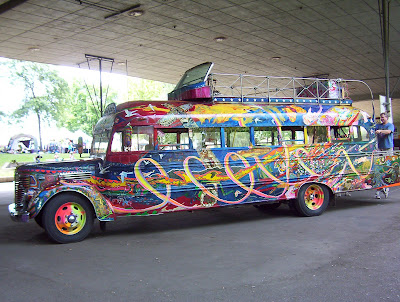 also, Further, the merry pranksters bus, was in attendence: 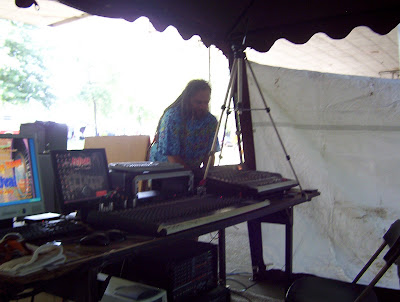 there are a lot of things i could say about this experience. probably i will add some of them later. right now i am slightly too drunk, and mostly too lazy to elaborate: however, know this:
music festivals are fun.
i am a hippie at heart, especially when compared to the entire South....
i should eat something to balance out the beer...
more pictures to follow, eventually.
Posted by Satan at 9:02 PM