remember how i said wednesday was my first day of work??

turns out, he meant NEXT wednesday. whoops. guess i should have requested a date.
so i get there, in this rented office full of engineers in their rightful places, all heels and skirt and caffeinated energy, and one of the engineers has to call my boss who's like, "what are you doing there? i'm traveling..."

at least i wasn't a week late, eh? i told my friend Mirror, and she was all "now you are extra ready!" and recommended i go shadow some of the palm/tarot readers in jackson square. it was a thought, seeing as how i was completely wired, and tourists are generally entertaining.
instead, Matt and i decided to bike to Lake Ponchartrain, which is a not quite so convenient 15 mile round trip. or i should say, Matt decided he wanted to bike there, and see the UNO campus, and i went along, because i was JACKED UP ON CAFFEINE. definitely a difference in basic readiness and physical capability.

that is probably the first or second time i've ever ridden that far on a bike in my life. compare that with mr. "i rode a bike all over bleeding chicago", and i'm just grateful he didn't dust my ass. 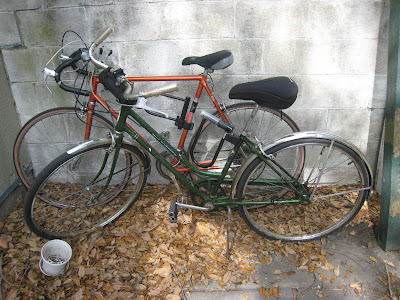 his bike: 1967 Schwinn road bike, in good condition (the orange one).
my bike: 1969 or 70 Schwinn cruiser, which i found abandoned in a friend's yard, a little rusty. it has an internal hub on the back wheel, so that means 3 gears of my very own (green one).
at the time i gained ownership of the bike, it had a flat back tire, which rendered my riding of it a little difficult, so i didn't really. just loaded it into a vehicle and brought it back to my basement (i lived in portland, OR at the time...no, new orleans has NO basements whatsoever, for a really good reason.) i later fixed the sucker up, to be rideable - brought it to the sneering hipster at the bike shop, who fixed my back flat tube and supposedly fixed my shifter on the internal hub, which was wonky.

later on, down here in NOLA, i brought my bike to another bike shop to get an estimate for a tune-up, and they tweaked my shifter so it actually worked.
thus, i set out on my 15-mile journey with a working shifter....and a slipping chain.

granted, i didn't realize that until a few miles in, going uphill, across an intersection.
fun times.
i'll be back at the bike shop soon.

one other bad part of this plan: redheads (that's both of us) sunburn, even in march, when it comes to the south. so i came back a bit crispy, decided to nap on the couch, and promptly fell asleep, for the rest of the day AND night.

i felt more than a bit like a zombie when i got up today, lemmetellyou.

so today we perambulated the neighborhood a bit, playing the "if i were a billionaire, i would renovate that house" game. saw some fun houses, and a lot more terrible ones. we live in a good neighborhood, but this is also post-katrina land, and a lot of the houses around here look like this: 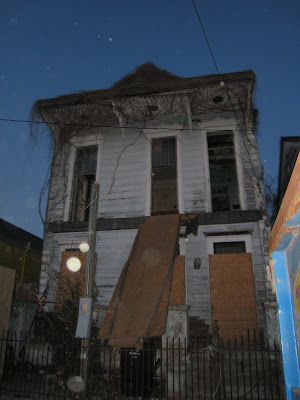 (but hey, check out all the orb action; pretty crazy, eh?)
or this: 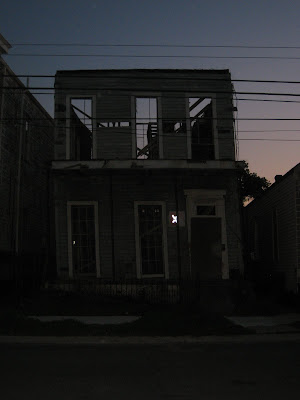 so in all our walking glory, we got a crime treatise (regarding the street we were on) from a random neighbor, and also bought a chinese-style side table from a crackhead. 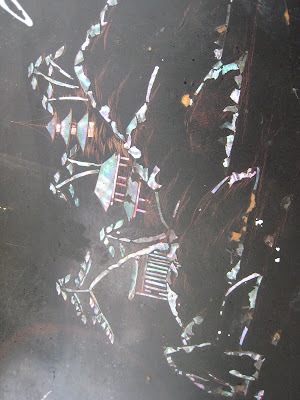 at first we just thought he was an alcoholic, but no. at first he said we could take the thing for free, so we went for the truck and when we came back, and loaded it and an armoire (which was broken, so we decided to take it for its wood, to build shelves) into the truck. 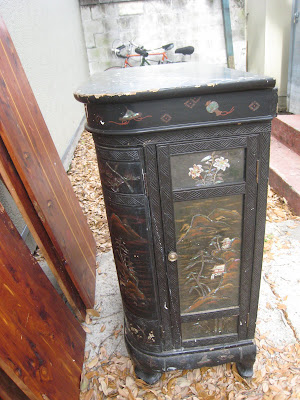 whereupon, mr. crackhead decides he really needs $10 for his crack rock or whatnot. so as we're ready to leave, he's all "you gonna give me what i asked for?" 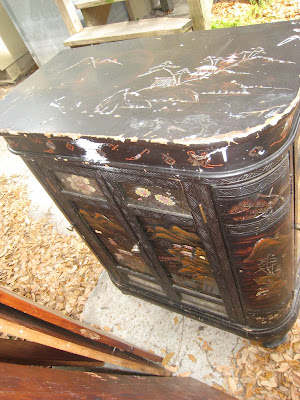 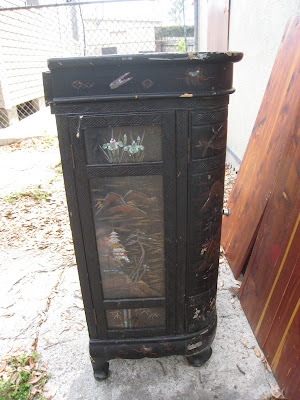 neither of us have any cash, so we decide to head to the bank.
and mr. crackhead duly climbs into the back of the truck and proceeds to rattle off this wholly unintelligible rant the entire time, while we visit two (yes, count 'em - first one was a right bastard about it all) ATM's to get his fucking ten dollars.

sorry the pictures are a little funny, but it's heavy, and i'm not moving it... (also, Matt must clean the crackhead's side table, as it is BEYOND FILTHY and i refused to have it in my house until further cleaning)

it's not a bad table, we would have willingly paid $10 in the first place, but to be TRICKED INTO GIVING SOMEONE CRACK MONEY is just ......wrong!!! it's $10 so it was more trouble than it was worth to argue the point but argh!

this kind of shit always happens to me.

but then, evidently the universe heard me grousing.

i'd been desirous of a coat rack lately, this to clean out my "closet(s)" 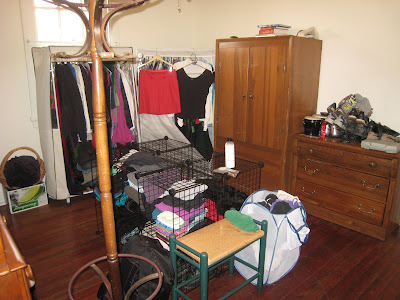 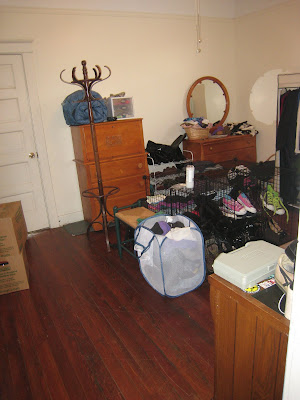 of some of my jackets, which are really in the way, and hampering my access to, well, everything.
(yes, i did use AN ENTIRE BEDROOM as a closet. since there are no real closets anywhere, we have an extra bedroom, and did i mention i'm a PACKRAT??)

and this evening Matt was standing by the front screen door, gazing into the street (which was reasonable, some of our neighbors being HIGHLY ENTERTAINING and screaming at each other) when he starts pointing, and goes, "what is that? what?"

and lo, and behold, standing in the streetlight beside a garbage can,
a coat rack.
a wonderful, functioning coat rack!!! 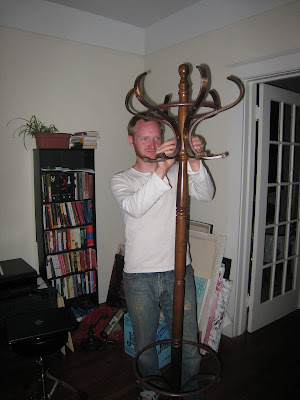 the coat gods are smiling at me, i just know it.
Posted by Satan at 1:33 AM