bah, humbug! and other grinchy statements

let me say that again, in case y'all didn't hear over the protesting.

yes, i know "everyone" loves Xmas. presents, and santa, and oh my gods will the bullshit ever end?

i think my largest gripe with Xmas is the advertising, starting in September and marching towards January. i was one of those ornery kids who wouldn't believe in santa, so it holds no fuzzy memories for me. none. nada.

i'm also not christian (i can almost hear the "unfollow" clicks now! snerk!) so, yeah. i don't celebrate Xmas, for many reasons.

but i do celebrate Yule.

now, what is Yule? well it's plenty of things - it celebrates the winter solstice (longest night of the year), and it celebrates winter, and it also celebrates the earth coming back from winter, and edging towards spring.
traditionally people decorated (not killed) live trees (outside) with food, for the woodland critters, to help them survive the winter.
aaand, suchlike and so on.

this isn't a platform for one holiday versus the other, but it will explain why the extent of my holiday finery can fit onto my bookshelf. 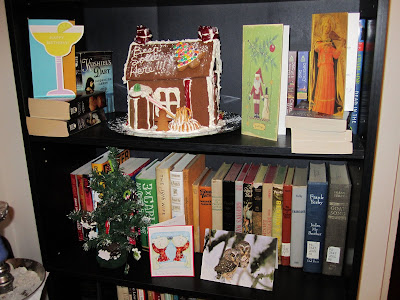 hey, i think the Holiday Bookshelf decorating might catch on!
note our gingerbread house, which is not, in fact, a house, but a Brewery.
i believe that just might have been Matt's idea, but i'm not sure. eggnog was involved.

i cut my tongue today. on an envelope. not fair. but i do have a fair amount of holiday correspondence that i send out. 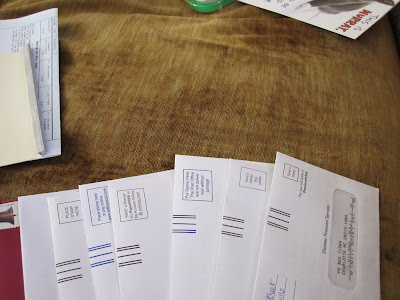 too much, possibly. well, some of those are bills. the rest is all hello, world of friends, i am still alive! 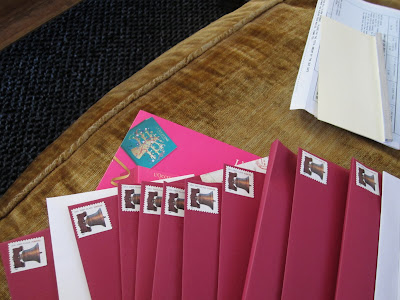 please write back, my buddies! i love letters. i avoid email for days, but i always check the mail box. go figure.

i have great stamps for winter correspondence, and i must use them. which is about half my motivation for sending out the winter-themed correspondence at all. 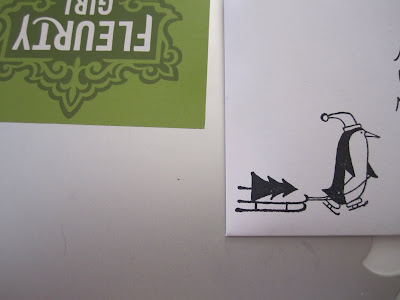 and finally, i've procured a picture of my purple/pink hair. 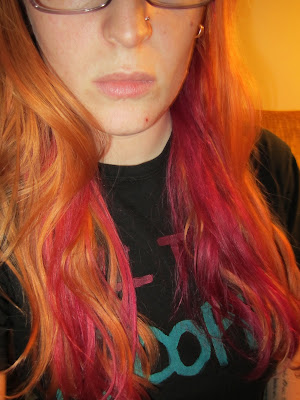 yes, i cut my head off in this picture on purpose. it was the only way i could get a halfway decent shot of the colors in my dim living room, and no i'm not posing for a picture with a tripod just to get a shot of my technicolor hair... i'll save that for a good shot sometime. as a photographer, i'm not fond of tripods in general, i'm more of a candids kind of girl - which is also why no one's taken a decent picture of me in ages. i miss my photographer friends, le sigh.

oh, and i got new strippah shoes. they are pretty fabulous, and full of the glitter. 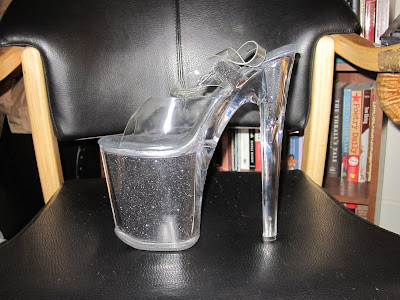 and, because it is that special (grinch-filled) time of year for me, where i go around sneering at decorations involving reindeer, i include a present for you - pictures of me, taken at work by my coworkers. 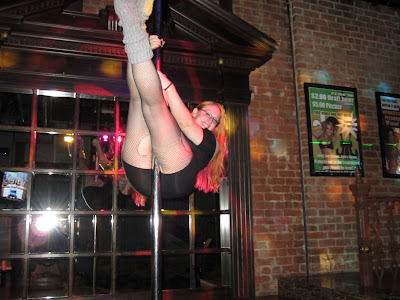 you can tell how bored we were that day. no customers for almost an hour. still, gave me time to show off my purty little working girl self to y'all. 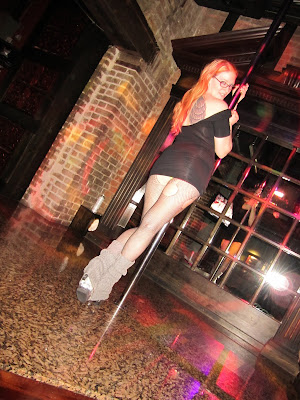 i talked to one of the head-honcho managers about writing about the club (including the name, oh gasp!) because a writer i know recently got kicked out of her favorite club for doing just that. it was the first time i'd ever asked to write about anything, but he gave me the go-ahead, "as long as you're not bashing anyone." picture him saying that in a great european accent, and you'll get the faintest clue as to what it's like working in my club.

wednesday night was fun, we went to the club's party for the employees (and also a bunch of random people i'd never seen before) and saw a burlesque show. it was nice to be there and not be working! my only regret is that i was unable to "inappropriately hump" my friend G. because i didn't see him. ah, well. i did get matt to dance on one of the VIP UV poles, so that's fuckin' awesome!

too bad i don't have a picture of that!

i do, however, have pictures of the UV pole in question.

this is me hanging upside down, 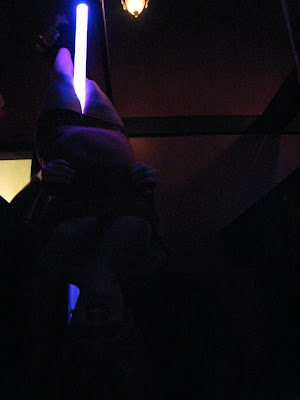 this is displaying the fact that the thing changes colors. 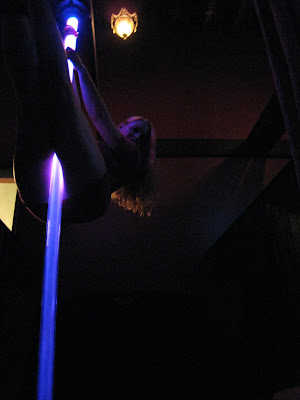 yes, yes it does. 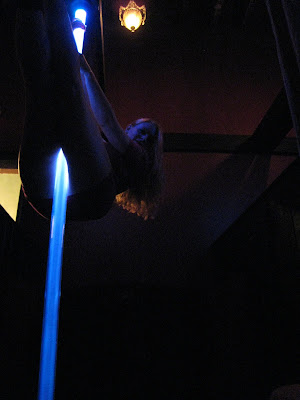 almost too quickly, it probably would hurt the head if you're drunk or hung over. but, i really enjoy them. also they are plastic, so they are really grippy to dance on, and i like that.
Posted by Satan at 7:25 PM

I'm probably one of those Christmas fanatics that you hate! :)

I just love spending the entire month of December finding the perfect present for someone I care a lot about. As I've gotten older, I've learned that it's a lot more fun to watch people open the present you got them than to open your own presents.

I love that people who are bitter and grouchy all year long can have their hearts warmed just a little by watching others give or donate. I love seeing the huge pile of toys donated to children who can't afford a present from Santa.

And even though my family drives me crazy 99% of the time, I love when we all get together every single year and tell silly jokes while we open presents. We all try so hard to find the best present ever, and it's sweet. If there were any fights or disagreements or hate between family members, it all goes away on Christmas. :)

Now that I'm done throwing up all over your comments section with Christmas cheer....

Have you seen Miley Cyrus down there yet? I read online that she was all up in the clubs last weekend. My sister is in NOLA right now on vacation, and I think I'm going to be coming down at the end of January! So we'll have to get a drink and you can show me where you work!

nah, i don't hate people just because they get excited over Xmas, i just hate the whole media/commercial/stores decorating in october part of it all.
and the music. oh gods, the music...

that being said, i also love to give presents, too! i make a lot of stuff.

miley cyrus, hmm! haven't seen her (something tells me she won't show up at my club) but man if i do i will yell about it!

pretty sure I love you even more now, if that was possible.

I hate Christmas, but I will make presents for my friends. I celebrate Yule when I'm feeling wintry (and if I'm up to decorating, it's all winter deco, not xmas), but this year I've been apathetic.

i am a child of the 80's, and i fell in love with legwarmers as a child. consequently i wore them throughout my life, both to ballet class and outside of it (in fact, i even have photographic proof from high school, 2002, when they were most decidedly NOT COOL).
i did a very large, expansive happy dance when they came back in fashion!
and when they go back out...
i'm still gonna wear them.