Because Sometimes, This Happens
Picture it:  freshman year in college.  Friday night, around eleven p.m.  My roommate, and our respective boyfriends really, really wanted to get stoned, but all of us were completely out of pot.
Angie’s boyfriend Greg said he thought he could get us something, and left in pursuit of the Holy Marijuana Grail.  Angie, Ronny (my ex) and I were chilling in our double room, played a very half-hearted game of Drinking Jenga.  Hey, those blocks are way more fun when they aren’t blank.  Especially when they say things like, “Take off everything but one sock.”
After almost two hours, Greg came back with a nice, but Very Small nugget.  “It was only five dollars,” he bragged.
I sighed.  “Greg, that was a total rip-off.  There is no way that will get all of us high.  I bet we’ll barely get a hit each.”
“Yeah, but my friend promised this is Really Good.  So it’s gonna be great.”
So, we had pot.  Unfortunately, none of us had thought about what we were going to smoke it out of.  The nearest thing to a pipe any of us had was a plastic Mardi Gras pipe (see example of one I caught recently, here). 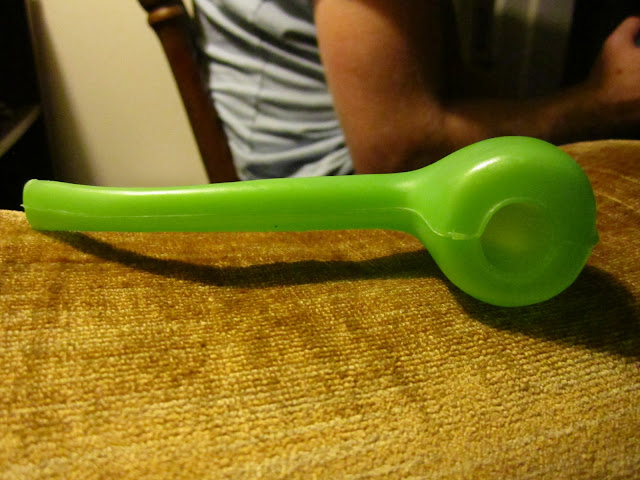 It was cheap plastic, and had no bowl whatsoever.  I jury-rigged a bowl by molding some aluminum foil around the sides of the plastic pipe, and punching holes in it with a safety pin.
Classy, I know.  Chalk it up to freshman year.  Near smoking disaster successfully averted, we grabbed our munchies – a bag of Doritos, a bag of marshmallows, and a bag of Twizzlers – and set off.
We walked about a hundred yards from our dorm.  At the time, there was this great abandoned house on campus (now tragically destroyed in the name of progress).  Not many people knew it was there, because it was hidden behind a bunch of trees.  We sat down behind the house, on a fallen log.
And I was right about that teeny nugget.  It gave four people a hit.  Not a big hit, or a teeny hit, just a normal hit.  I was pretty bummed.  I really didn’t expect to get very high, good pot or not.  But fifteen minutes later…
“Ohmygod, I can see Disneyworld!  Can you see it?”  said Ronny.
“What the fuck were you smoking, dude?  What are you staring at?” I said.  But it was pointless.  Ronny was totally in his own world, which, evidently, was in some seriously psychedelic colors.  Greg and Angie had slid off the log, and looked like they were holding each other up, pretty unsuccessfully.  And I had powered through most of the Twizzlers already.
“Shit, I think there is someone in that house!”  said Greg.
“That’s impossible, there’s nothing in there,” I said.  But he was insistent.  He wanted to check it out.  So Greg and I walked to the back door, leaving Angie drooling on the log, and Ronny still mumbling about cartoon characters.
The house must have been abandoned in the sixties, because it still had the vintage refrigerator and wallpaper, not to mention a really hideous modern chandelier.  Greg and I walked through most of the house, keeping out of the master bedroom, which had a very dubious floor.  We established that no, there was not anyone in the house.  Nor was there anything of interest in the fridge.  Greg and I exited the house, and resumed our positions on the log.
This was the highest I had ever been in my life!  I was impressed!  Maybe that little bud had something going for it after all…
But at the same time, I felt almost super-glued to the log.  Also, I was pretty sure Angie was asleep on some leaves.  It was time to head back to the dorm, and maybe to bed.
“Come on man, it’s time to leave Disneyworld,” I told Ronny, and slowly gathered the remains of our little picnic.
“BUT I don’t wanna go!  Disneyworld!”  he said, but he let me pull him off the log.  No one else ever understood exactly what he’d been seeing all night.  (Yes, I've dated some special ones, I know.) Greg and Angie pulled themselves up, and we got into a very extensive argument about how we were going to get back.
Someone suggested we drive Ronny’s car, which was parked in a nearby lot, back to the dorm – the whole hundred yards -  because it seemed like just too much of a walk.  Then we argued about who would drive.
“But I’m waaaaay too high!!!” we all cried, in successive turns.  Somehow we stumbled back and managed to get into the dorm.  Considering that the dorm was a girls-only dorm after certain hours, it is a fucking miracle that we weren’t detected sneaking the boys past the R.A. after hours, given how stupefied we were.
I didn’t suspect that perhaps the pot was “more-than-pot,” until the next day.  I awoke at 5 p.m., in gloomy light, and I still felt stoned.  Well, that wasn’t normal.  I tried to get Ronny and Angie up, but they were still dead to the world, and would be for hours.  None of us got anything done that Saturday.
Except Greg, that is.  He’d spent all of Friday night up and alert, making a Device – he was sure excited to show me when I woke up.  He’d spent the night carving (with my best fucking knife, no less) a hole in a square flip-top Altoid’s tin, so that the plastic Mardi Gras pipe would fit down in it.
“Look, it’s a stash box, and a pipe.  It’s the biggest bowl ever!”  he exclaimed.
I almost hated breaking it to him after all his hard work, but physics was against him – there was no way in hell that his sad little experiment would ever work.
“Most of the ‘bowl’ won’t heat up, so it wouldn’t work hon…  Plus you’d melt the plastic, and that would be a mess,”  I concluded.  “Sorry.  It was a good idea, though!”
Although he looked exhausted, Greg wasn’t willing to give up.
“Do you want that glass bottle??” he said, pointing at one of my wine bottles.
“You can have it,” I said.  Anything to get him to relax and sleep!
“Because I think I can make a bong out of that!” Greg said.  “All I need is some plastic tubing…”
Posted by Satan at 1:00 PM

acid weed? yikes! but it's cheaper than Disneyworld.

indeed! most things are cheaper than disneyland... disneyworld. either way, it's expensive as hell.
fortunately, this way was only $5 and a wasted day...
: ]