obviously, you can tell i am on vacation.

only in the South (Deep South, at that) can you get away with a bunch of rich old white guys running around in sparkly colored versions of suspiciously Klan-looking uniforms, and a bunch of black people (because Zulu has men and women in it, unlike a majority of the "traditional" krewes) running around in what looks like blackface.

we have a hard time convincing people that all this ISN'T a bit racist, sometimes.
it's not.  it's just... Mardi Gras.

but it's all in good fun.  Zulu is one of the few Krewes that doesn't mask.  well, i don't think technically they're a "krewe," i believe they bill themselves as a "social aid and pleasure club." but whatever.
hence the black paint.  and i really don't even begin to pretend like i know the significance of traditionally painting oneself black and white. 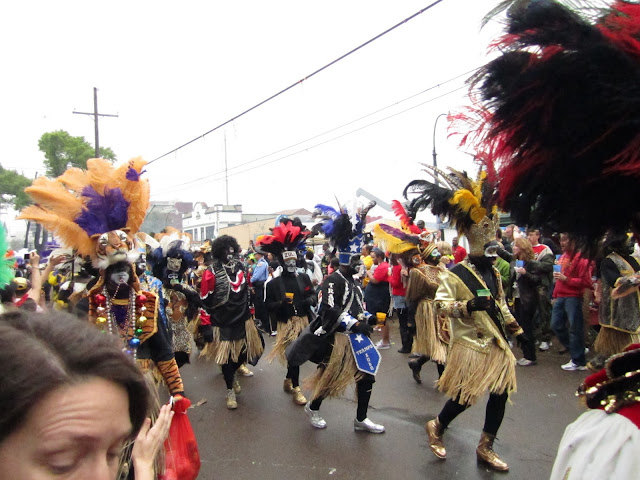 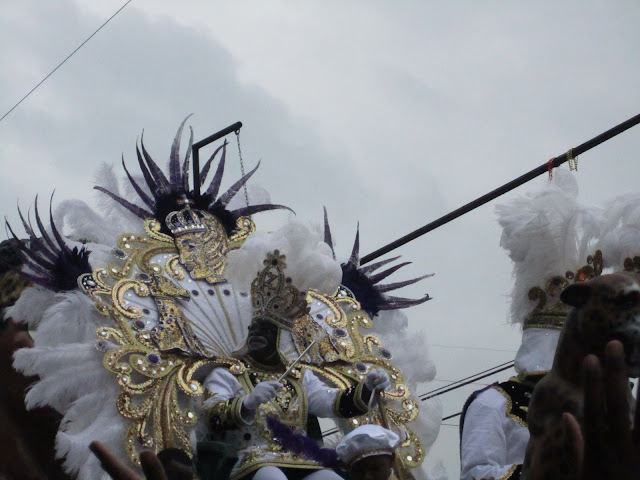 when people talk about Mardi Gras Indians.... well, these aren't them.  i believe this was the King Zulu. 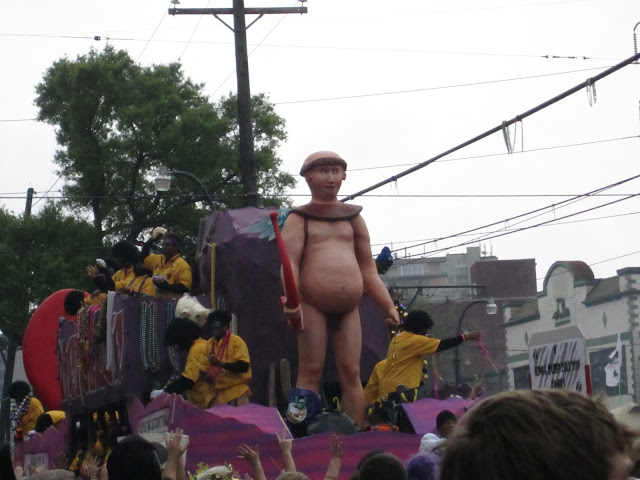 and then, there was a naked priest. 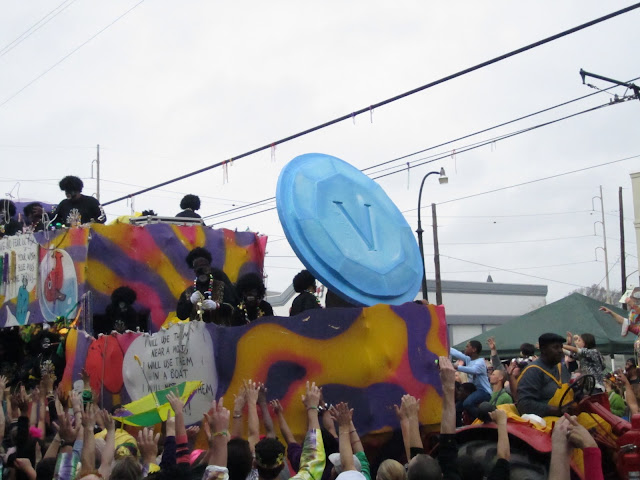 and then, there was viagra! 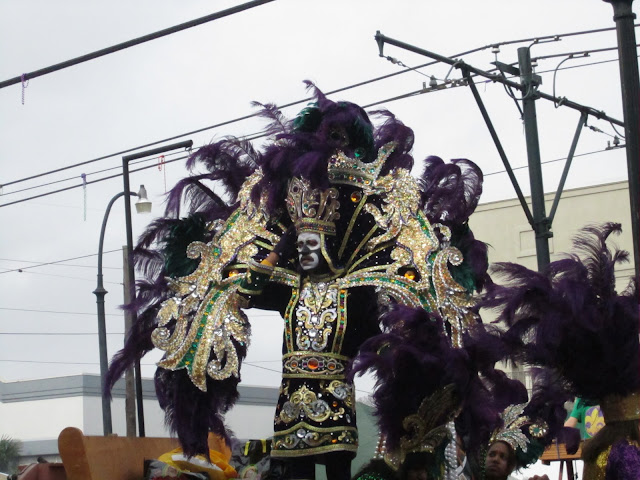 there's all kinds of Grand Dudes and Dudettes in these parades. 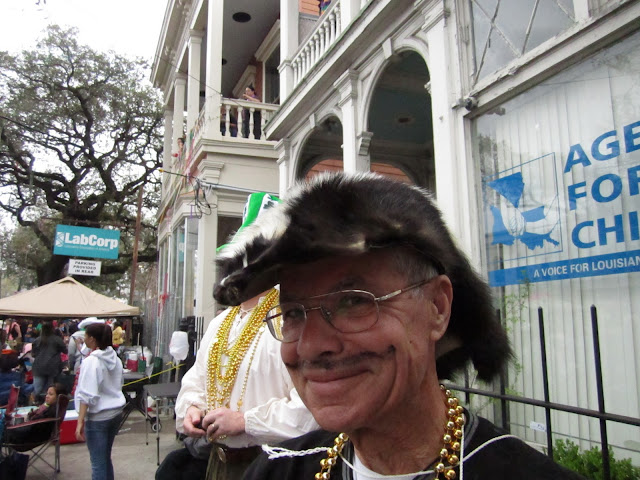 this guy was billing himself as Pepe Le Pew.  and he squirted me with some sort of body mist.  yep. 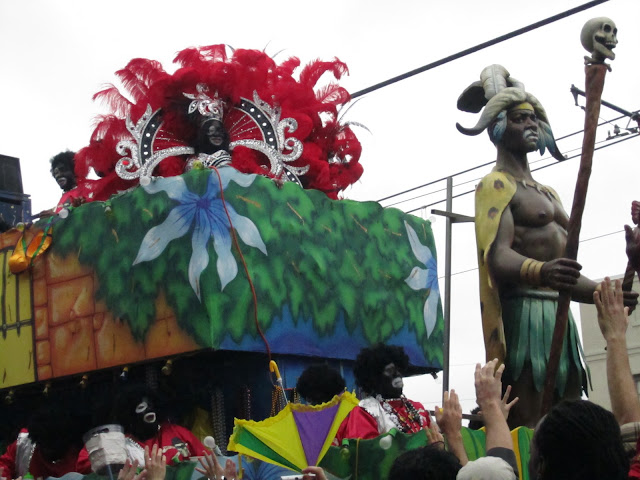 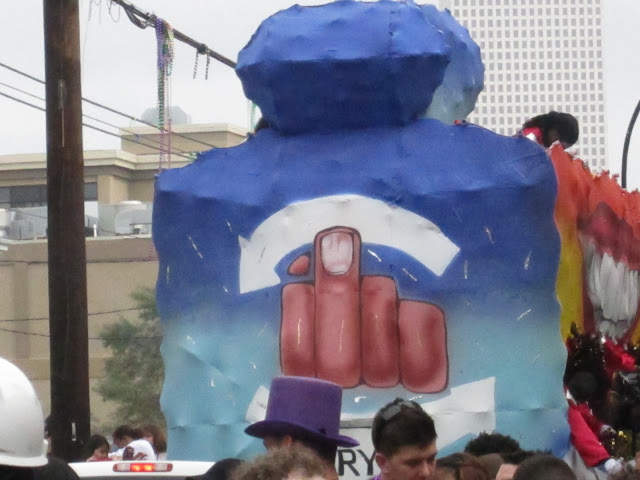 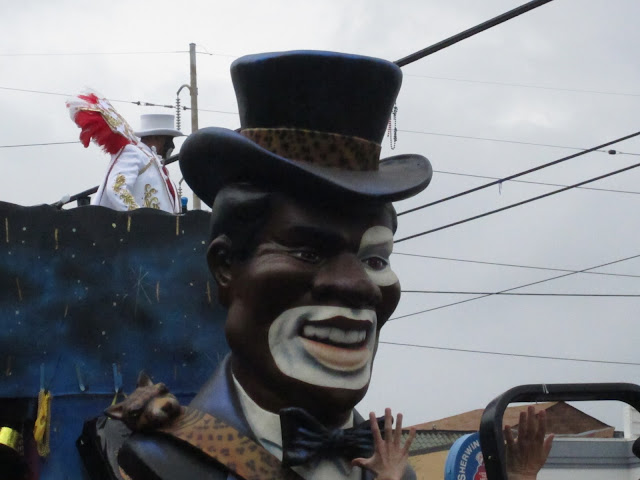 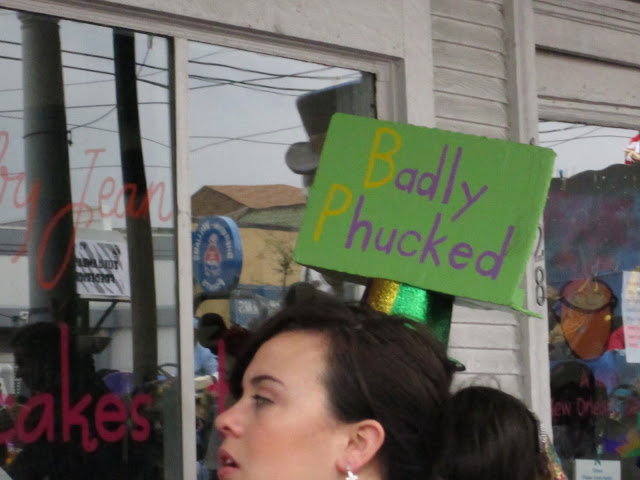 obviously, there's still some resentment towards BP down here. 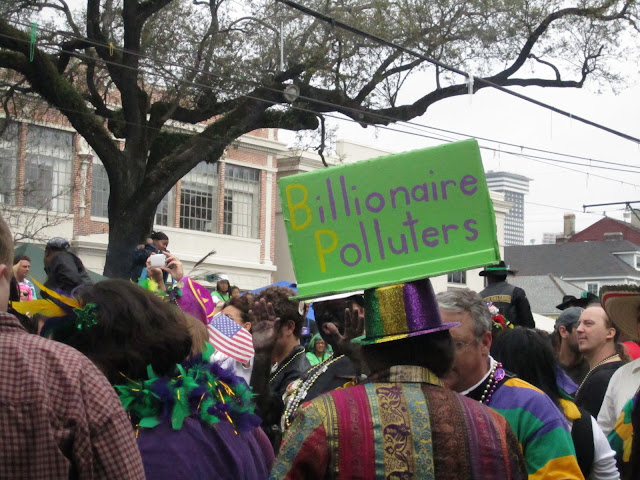 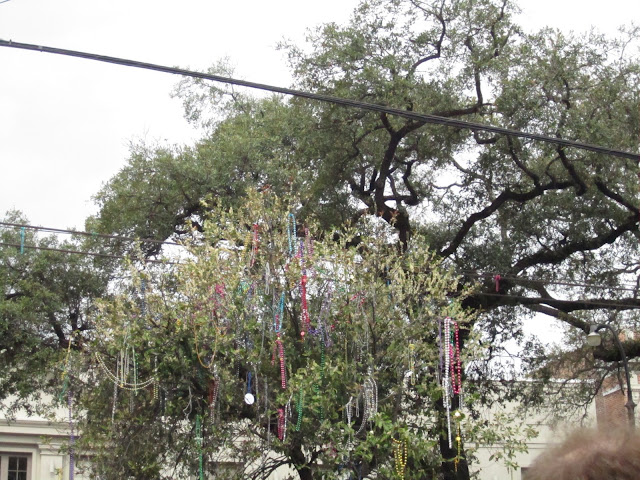 we decorate everything here. 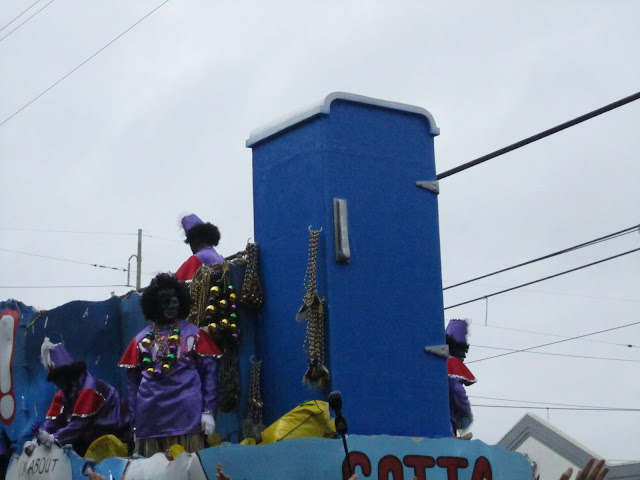 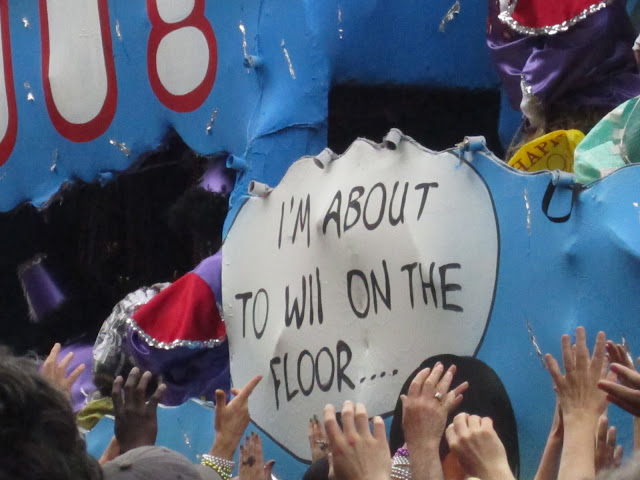 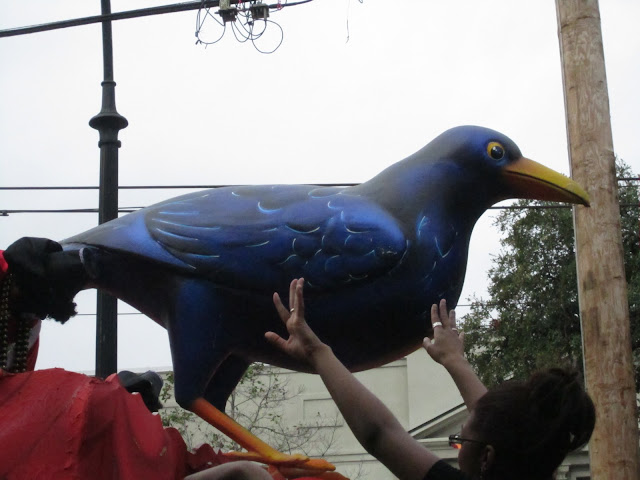 i'm quoting the raven, here:  "stop touchin' mah belly!"
we also caught the very beginning of Rex, before just deciding to say fuckit and go home.
we were all tired. 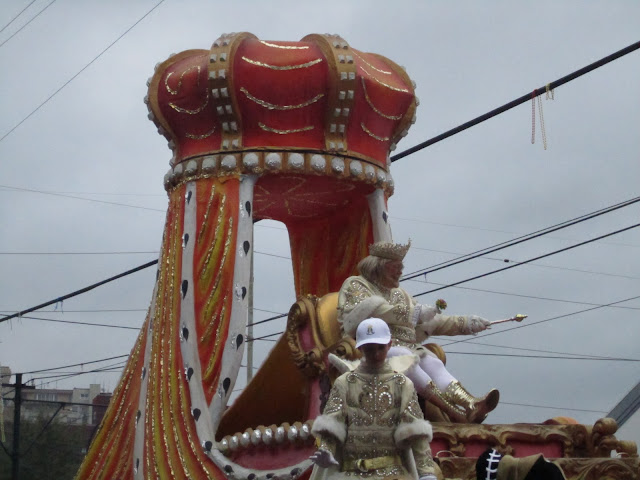 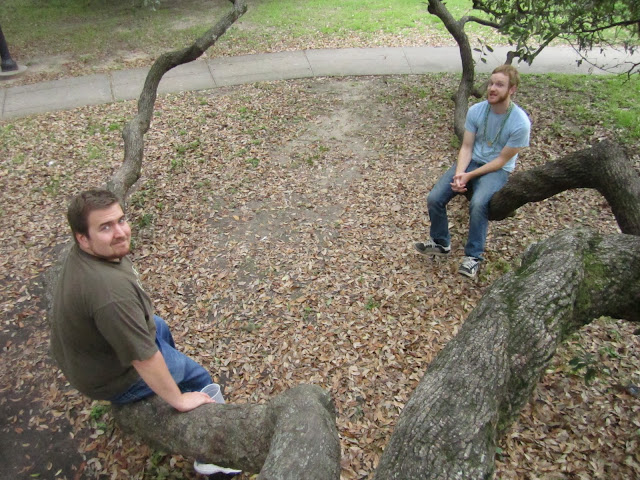 we justified ourselves by chilling out for a while, just enjoying the nice weather before we went back to sit in our house like weirdos. 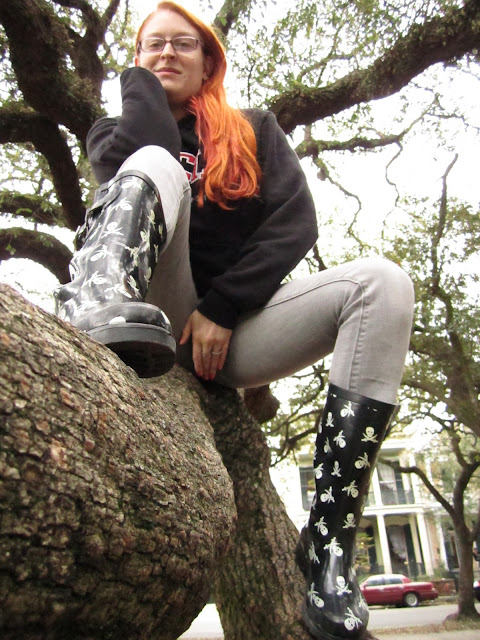 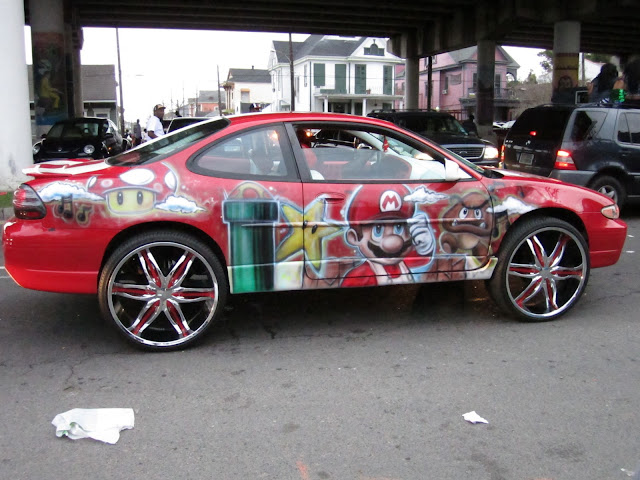 when we did get back to my place, we were surrounded by a whole crowd of seemingly pointless traffic and tons of people just milling about...
that, and the ugliest cars on the planet.
my reaction: 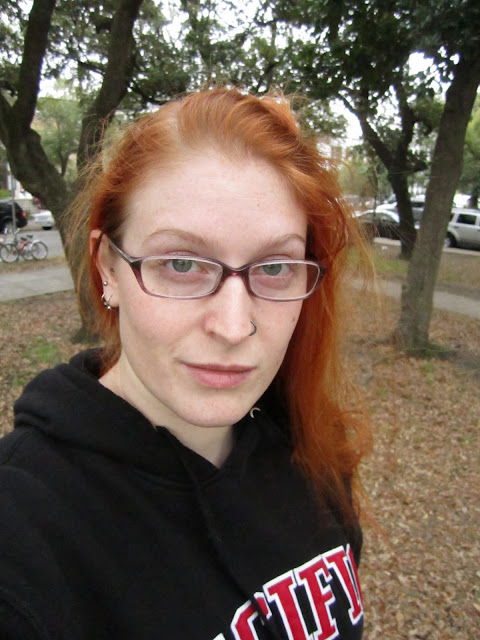 "mario....really???"
those are tired, tired baggy eyes of satisfaction, there.  even if Zulu didn't throw me a damn coconut.
Posted by Satan at 10:06 PM

Labels: the last of the mardi gras shit i swear